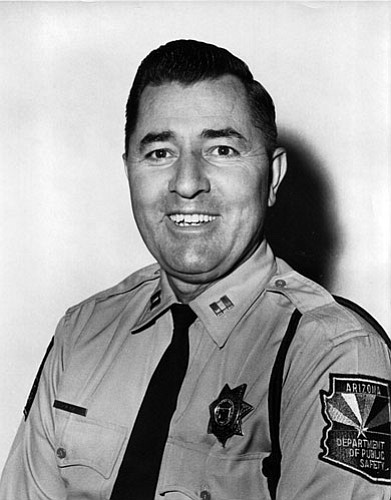 C.D. spent his childhood in Douglas, Ariz. After graduating from high school, he worked for the Southern Pacific Railroad in El Paso, Texas. While there, he met the love of his life, Aleta Jo Large, at a Halloween party. They got married on April 4, 1941, in her parent's living room.

The newlyweds made their home in a railroad outfit car and traveled with the railroad. As World War II began, he served our country proudly as a Merchant Marine. After the war, the family moved to Coolidge Dam and operated a gas station, cabins, bus stop, post office and a café with friends, Jack and Mary Hackett. When the highway re-routed, they sold their business and C.D. joined the Arizona Highway Patrol serving in Coolidge and Casa Grande. The family transferred to Kingman in 1963, where they have since lived happily. C.D. retired as zone commander of Northern Arizona after 27 years of service on the patrol.

The retired life didn't agree with the always-active C.D.; therefore, he accepted a position for a short time as city magistrate. He also worked in trustee sales.

C.D. was very active in the Elks Club and enjoyed his tenure as exalted ruler. He was also a member of the Masonic Lodge No. 22 F & A.M. and was proud to be the precinct committeeman for the Mohave County Democratic Central Committee. C.D. always appreciated his friends and made it a point to visit them when they were hospitalized, oftentimes-bringing roses from Aleta's own garden.

C.D. was preceded in death by his parents; two brothers, Junior and Harris; one sister, Evelyn; and his youngest son, Clarence Wesley.

Services will be held at 10 a.m., Tuesday, May 27, at the First Southern Baptist Church, 3120 Hualapai Mountain Road in Kingman.