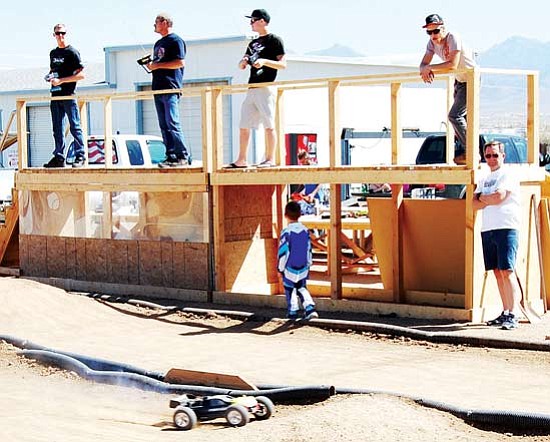 Submitted<br> On your marks: Andy Lewis of Kingman has brought the thrill and competition of remote-controlled racing back to the Kingman area. Here, participants race their cars at RC Raceway, 4455 N. Bank St.

KINGMAN - Before the badgering between the two sides could begin in Kingman, the thrill of RC racing first had to reappear here.

Kingman resident Andy Lewis has organized the building of Kingman RC Raceway at 4455 N. Bank St. and continues to work on improving the track and adding to it.

"This track is the first track we've had in Kingman in a long time," Lewis said.

Lewis was 14 years old when he first started RC racing, he said. Though he has drifted in and out of contact with the sport, it has never been far from his heart. "I've done a lot of other things like real road racing," he said. "I keep coming back though."

Lewis said that he has raced a lot at the track in Lake Havasu City. In fact, that is where he got his start. Lewis is impressed with the continuation of races in Havasu and noted that the city pays for the water and electricity there.

Kingman RC Raceway just opened in January. The track was put together during the month of December, he said. An area that he hadn't figured on having many issues with has caused some minor problems since the track's inception. "We've been rained out three times and snowed out once already," he said.

Most of the cars and trucks are scaled at one-sixteenth, one-tenth or one-eighth and are powered by a .21-cubic-inch engine. The vehicles are driven with wireless signals as the sport has caught up with technology by excluding radio frequencies.

One of the big differences between electric and gas cars is that the electric are two-wheel drive and the gas cars are four-wheel. The gas cars are able to better grip the track. "Gas engines are harder to keep running unless you know what you're doing," Lewis said.

For anyone thinking of getting into RC racing, Lewis said to expect an initial investment of $300 to $400. After that there are some expenses for the maintenance of the vehicles, but Lewis said that they could be kept to a minimal amount.

Kingman RC Raceway has open practices on Saturday from 1 to 7 p.m. Lewis said that he wants to open the track from 9 a.m. to 5 p.m. Monday through Friday, as well.

The cost for open practice is $5. When the actual racing takes place at noon on Sundays, the cost is $10 for the first class of racing and $5 for each additional class. Children 12-and-under are $5 for each class and girls get to race for free.

The best attendance that Kingman RC Raceway has had was more than 30 participants, and Lewis said that there are probably more than 50 people involved at the raceway who own cars.

"People who come out as beginners can ask anyone for help and they will get it," Lewis said. "Most guys are really good. When they get mad because of what happens on the track, they just leave. All in all, we get along really well."

The raceway uses the AMB scoring system for lap times, and Lewis has handouts for the drivers. The spectators are unable to see the times as the races are happening, but this is one of the areas that Lewis is determined to correct. "We're looking into getting a scoreboard so that everyone will be able know what's going on," he said.

Beside the scoreboard, Lewis has a lot of things in the works to improve the raceway. The asphalt is already there, so he said that he wants to get a road course going for those who may have an interest in that aspect of racing. "The difference between road and dirt is that in road you're just chasing the corners," he said. "You don't have any bumps to worry about."

Lewis said that he would like to get a points series started, but having the same drivers consistently race has been a sticking point. However, that hasn't stopped him from trying to work out a three-track series with the ones in Havasu and Boulder City, Nev.

Lewis has started a worthwhile endeavor in that it gives Kingman another hobby to pursue with fervor. More information is available at the raceway's Web site www.kingmanrc.com.

The decision is hanging out there whether or not to be on the gas or the electric team, and you can choose which side to be on at Kingman RC Raceway.