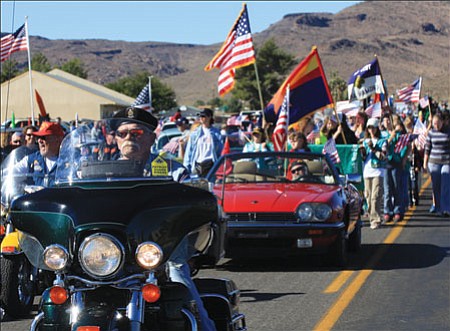 Several events will be going on in and around Kingman in celebration of Veterans Day, which falls on Tuesday.

Chuy's Mesquite Broiler at 3505 Stockton Hill Road will host a Poker Run from 11 a.m. to 5 p.m. today. Participants will travel from Chuy's to various locations throughout Kingman, collecting a new card at each location.

From Chuy's, participants will head to the Hackberry General Store along Route 66 in Peach Springs, then to the Hualapai Mountain Resort Lodge, and finally to the Castle Rock Grill at 1711 Stockton Hill Road before returning to Chuy's.

"It's $15 to participate in the run, and that includes a run pin and a quarter chicken meal here at Chuy's," said shift manager Carmella Hynes. "The best hand will receive a trophy and $50 cash and a $100 gift certificate from Performance Specialists."

Chuy's will also present one of its own $25 gift certificates to the runner with the worst hand. The awards ceremony will be at 5:30 p.m., with a live band providing musical accompaniment.

All proceeds from the poker run will go toward the Special Operations Warrior Foundation, an organization dedicated to providing scholarship grants to children of Army, Navy, Air Force and Marine Corps special operations personnel who died as a result of an operational mission or training accident.

The Veterans of Foreign Wars Post 3516 will conduct its annual Buddy Poppy drive throughout the day today and Tuesday. VFW personnel will be handing out the free flowers at grocery stores across the area, and will also be asking for donations to the Veterans Relief Fund.

A VFW tradition since 1922, the Buddy Poppy drive has raised millions of dollars for veterans and their families. All proceeds from this year's local drive will go to provide assistance for local veterans, their spouses and their children.

"If a veteran or surviving spouse or family of a veteran is in need of something, that's where (the fund) comes in," said VFW post 3516 Junior Vice Commander Melissa Robb. "Any kind of help they need, that's what that money's used for."

Also at 10 a.m. on Monday, the Kingman High School social studies department will present its annual "A Tribute to Veterans" assembly in the Hilda Aguilar Center for the Performing Arts, 4182 N. Bank St. The tribute will feature musical performances, including "The Star Spangled Banner," "America the Beautiful" and "The Boogie Woogie Bugle Boy from Company B," as well as Veterans Day readings from several KHS students.

Veterans Day proper will kick off at 7:30 on Tuesday morning, with a free veterans breakfast lasting through 10:30 at the Kingman Elks Lodge, 900 Gates Ave.

This will be followed by two ceremonies. The first, the annual Veterans Day flag raising, will take place 11 a.m. at the Veterans Complex in Centennial Park. The ceremony will be hosted by the Disabled American Veterans Auxiliary Unit 10.

An hour later, a remembrance ceremony will take place at the Veterans Memorial in Railroad Park. A detachment from the Marine Corps League Color Guard will raise the flag, followed by an opening prayer, a greeting and recognition of dignitaries and attendees, and a brief history of the memorial.

Then at 2 p.m., the Lingenfelter Center and The Gardens Rehab and Care Center will conduct their third annual Veterans Day parade around the block at 1099 Sunrise Ave., behind the Safeway at Stockton Hill Road and Detroit Ave. The facilities provide care for more than 40 veterans, many of whom will be in the parade.

"We're hoping to have quite a turnout as far as participants," said John Kirby, the marketing director for the facilities. "We're anticipating the local Harley owners group, some vintage cars, I think we're going to get Engine 21 from the fire department, some heavy equipment ... we will also have local Pop Warner football team and the cheerleader squad."

The Gardens will provide refreshments after the parade. For more information, call Kirby at (928) 718-4852.