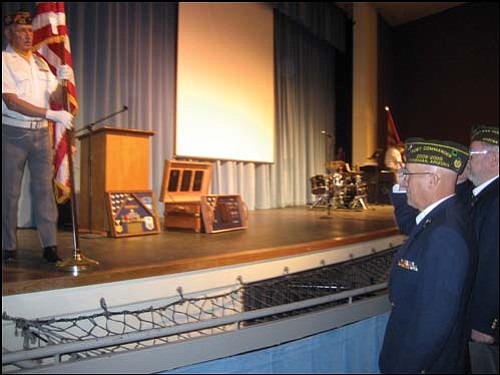 KINGMAN - A younger generation celebrated the sacrifices of veterans from all generations at Kingman High School Monday morning.

This was the 12th year the school and students have honored local veterans, said Joan Noble, a Social Studies teacher who has planned the event for the past several years.

As a special twist, Veterans of Foreign Wars Post 3516 honored Noble with a letter commemorating her for her hard work organizing and holding "an incredibly moving tribute" to veterans every year and for teaching the students to have duty, honor and respect for their country and the men and women who have served it.

Similar tributes to veterans were held at the middle and elementary schools.

The tribute started with the presentation of the colors by veterans from VFW Post 3516 and the Pledge of Allegiance by the Little School preschoolers.

The school choir had veterans saluting for "The Star Spangled Banner" and tapping their toes to "The Boogie Woogie Bugle Boy of Company B."

More than half of the students, faculty and veterans in the Hilda Aguilar Center for the Performing Arts stood when school principal Pat Mickleson asked those attending to stand if they had a family member currently serving or who had served in the military.

Students, faculty and veterans alike honored those students who completed the Military Entrance Processing Station and would be enlisting into the various military branches once they graduated.

During the tribute, students honored veterans with personal poems, thank you letters and essays they wrote and recited.

"As we sit here in a pride-filled room, we will remember," one student said as he recited a poem written by another student.

Student Lola Cude read a poem of her own about her grandfather who had served in the military, a man she never got to meet.

"His hero lives inside of me," she read.

Students also gave a brief history of the Army airfield base that once existed at the Kingman Airport and its significance to the area.

Mickleson also explained the significance of the shadow box of mementos and medals that many veterans have. It was considered bad luck for the shadow of a sailor leaving the U.S. Navy to reach the shore before he did when he retired.

In order to prevent this, his fellow sailors would construct a sturdy box to hold the sailor's "shadow" of past achievements and any mementos he picked up during his service. The box would later be given to the sailor.

As a fitting end to the tribute, students gave a short history of "Taps," which was then played by student Page Shaw.

As the veterans filed out of the theater, students and faculty stood and applauded.