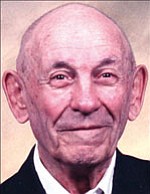 Inventor, innovator, father of four, Arthur Huonder died at his home at the age of 96 on Nov. 8, 2008. Born in St. Paul, Minn., Art became a Kingman resident in the early '70s. He was successful in having lived a self-sufficient life residing in his own home for the past 10 years. Art was a member of St. Mary's Roman Catholic 4th Degree Knights of Columbus.