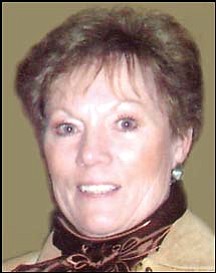 She passed away peacefully in her home, while surrounded by her family and friends.

Mom was born in Duchesne, Utah, on Dec. 10, 1947, to Glen and Elva Wilson Ivie. She was their oldest daughter and the third of 10 children.

Her family moved occasionally, and she graduated from Cyprus High School in 1966.

After high school, she moved to Kingman to live with her aunt, Lori, and work as a waitress.

Later, their marriage was solemnized in the Salt Lake Latter Day Saints Temple.

While Dad was serving in the Army, their first son, Troy Dewain, was born, while Mom was in Utah.

Dad returned home from the Army, and their second son, Richard Earl, was born.

Dad worked in the copper mine near Kingman, and they set up their life surrounded by many close and lifelong friends.

In 1982, the family moved to Tooele, Utah, where Dad continued in the mining industry, and Mom raised their boys.

After the boys were married, circumstances took Mom and Dad to Elko, Nev., where Dad completed his mining career and Mom worked at Smith's, mostly to socialize.

No matter where Mom and Dad lived, they made great friends that have lasted a lifetime.

Thanks to you for your endearing friendships to both of them.

After Dad was killed in a car accident in November 2005, Mom moved back to her roots and built a new house near Duchesne.

It was her dream house, and she loved having people there, especially her grandkids.

This was going to be her reward for her lifelong service to others.

Unfortunately, this time of her life was cut short ,and we will miss her more than words can say.

We know that she had a joyous reunion with her eternal companion on Friday morning, along with her parents and grandparents.

She is where she is supposed to be, surrounded by loved ones. She doesn't have cancer anymore, and she is pain free now.

She was preceded in death by her husband, parents and grandparents.

Burial will be in the Strawberry, Utah, cemetery, under direction of the Hullinger Mortuary, Roosevelt, Utah.

Condolences may be sent at www.hullingermortuary.com.

In lieu of flowers, the family suggests donating to "JoAnn's Relay for Life Team" at your local Zion's Bank.