A well-deserved honor
Role of honor guard has changed 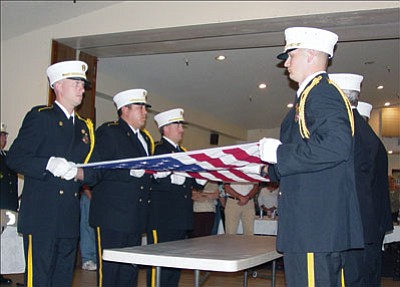 Courtesy<br><br> The Kingman Fire Department Honor Guard performs a flag service at a memorial ceremony for Nolan Davis on Oct. 29, 2007, at the Kingman Elks Lodge. Davis served as a volunteer firefighter with KFD for 25 years.

KINGMAN - Firefighters are often faced with tragedy, and sometimes it's within their own ranks.

The Kingman Fire Department Honor Guard has been created to guarantee those sacrifices are remembered, the fallen respected and their family members supported.

Honor guards were primarily created to assist in memorial ceremonies from the point of death to interment. Services range from casket watch to funeral processions to presenting the colors.

Now, honor guards have expanded their services to retirements in the fire service, parades and presenting colors at community activities.

The main role of honor guards is to pay respect to the fallen and to support their family, said Keith Eaton, commander for the KFD Honor Guard.

"It just makes you feel good to be there and make the department proud," Eaton said.

Eaton has been in fire services for the past 23 years. He helped bring the honor guard to the KFD a little more than a year ago. "We try to get out there," Eaton said. "We try to get people aware of that."

The honor guard in Kingman participated in its first memorial ceremony for a fallen firefighter in October of 2007, a month after the decision to create the honor guard.

The farthest the honor guard has gone was to participate in a memorial service in Los Angeles. The experience helped KFD establish a bond with the Los Angeles City Fire Department, Tanner Miller said.

Miller said he joined the honor guard to guarantee any fallen firefighter and their family would receive the necessary remembrance and support.

The honor guard has also gone to memorial services in the Phoenix metropolitan area to support the surviving firefighters and families.

Locally, the honor guard was a key participant in the memorial ceremony for the anniversary of the KFD firefighters who died in the Doxol explosion on July 5, 1973. There, several honor guards from across the country attended in support.

Laron Engineering was one of the local businesses to support the ceremony by creating Maltese crosses from pieces of the exploded tanker. They were given to the surviving family members for free, with the remaining crosses sold as a fundraiser for the honor guard.

In Kingman, the honor guard also led a memorial ceremony on Oct. 29, 2007, following the death of Nolan Davis. Davis served as a volunteer firefighter with KFD for 25 years.

The honor guard has participated in local memorials to leading the Professional Fire Fighters of Arizona annual memorial in Phoenix during October. The ceremony remembers the firefighters who died in the line of service across the state.

"It was pretty awesome because I got to read, as a commander, the names of our guys," Eaton said.

The family members of Joseph Chambers - one of the 11 Kingman firefighters killed in the boiling liquid expanding vapor explosion - were in attendance. Following the ceremony, the family contacted the honor guard to donate $325 toward the purchase of an honor guard flag.

Donations are what the non-profit organization has to rely on.

"We try to do this all on our own," Eaton said.

Donations are used to purchase uniforms for the honor guard, as well as help defray the gas expenses for traveling to the ceremonies.

"I think the members of the department have come closer because of this," Eaton said.

As often is the case with the fire service, members of the KFD gave the start-ups a friendly razzing. The attitude changed when the organization materialized and showed its ability.

The Kingman Fire Department Honor Guard is made up of 13 firefighters. The KFD had tried previously to start an honor guard during Fred Warring's 26 years of service, including after Sept. 11.

"I heard some words tonight like brotherhood, honor, respect," Warring said. "That is what it is all about."

Warring plays the bugle for the honor guard.

"I feel what we've put together would really honor our fallen brethren," Warring said.

The KFD Honor Guard is open to any IAFF 4191 member.

Curt Schrade was one of the second wave of firefighters to join the honor guard.

"This was something that it didn't take long to recognize that these guys were serious and it was something good for Kingman and the department," Schrade said.

The members meet at least once a month - including drill practice. Shane Milligan and Chris Simpson underwent training to become drillmasters.

Simpson said he enjoys being a part of the honor guard, especially with the drilling due to his military background.

Having the son of a firefighter who died in the BLEVE as a captain, Mike Stapleton said joining the honor guard had more meaning. He said he feels he is honoring Captain Bob Casson and his father William L. Casson.

"It allows me to pay my respects to the guys that came before that gave the ultimate sacrifice," Stapleton said.

The KFD Honor Guard is a member of the National Honor Guard Commanders Association. They are working with other honor guards in Arizona to form a statewide association, Eaton said.

The honor guard is also looking forward to participating in the IAFF Fallen Fire Fighter Memorial in September in Colorado Springs, Colo.