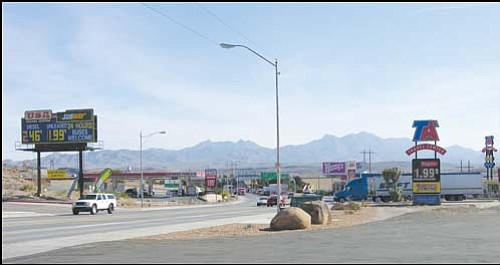 JAMES CHILTON/Miner<br> Competing gas stations along both sides of South Beale Street have dropped their prices to below two dollars per gallon.

KINGMAN - It seemed impossible four months ago, but today, it's finally happened. Local gas prices are below $2 a gallon.

Well, almost, anyway. While prices as low as $1.92 a gallon can be found at certain locations in town, according to AAA's Fuel Price Finder, Kingman's current average for a gallon of regular unleaded stands at $2.021 thanks to a few outlying stations still stuck in the $2.20 range.

Prices at both the state and national level have fallen dramatically from the peak they reached in early July. Arizona's current average of $2.057 per gallon is fully $2 less than the $4.09 motorists were paying on July 3, though it remains slightly above the current national average - a mere $1.908.

According to Michelle Donati, a public affairs specialist for AAA Arizona, gas prices are the lowest they've been in more than two and a half years.

Donati said since the nationwide financial crisis entered high gear with the collapse or sale of several large banks and investment firms in mid-September, gas prices have been falling at a record pace.

And the week prior to that, Donati said, was the biggest decline ever, with prices falling 22.1 cents in the seven days preceding Oct. 31.

"Crude's trading at $51 per barrel, and last week we saw it actually fall below $50 for a few days," she said. "That's a pretty substantial drop from the $147 per barrel we experienced in July."

Prices also have been dropping due to a sharp decline in the number of motorists taking to the road. While oil and gas consumption typically go up each year, Donati noted that statewide consumption has fallen dramatically, partly due to previously high prices, and partly due to the subsequent economic downturn.

In fact, gasoline consumption was down 2.4 percent from 2006 levels, and nearly double that from 2007. And while week-over-week consumption has begun to rise again, Donati said 2008 consumption likely would remain a net decrease from last year's.

With Thanksgiving just a few days away, Donati said it was likely prices will tighten up as drivers make their holiday trips, though fewer motorists are expected to do so this year. Even if consumption does rise over the holiday season, Donati believes gas prices likely would continue to fall through December, just not as fast as they have been.

"It's not that we're going to continue to see these drops of 15, 20 cents a week that we've seen for the last several weeks or so," she said. "But given the state of the economy, the fact that crude oil is continuing to trade in the low $50 range ... and the fact that demand continues to be below year-ago levels, we are anticipating that prices will continue their descent through the end of the year."

In the meantime, Arizona remains in the upper half of state-by-state gas prices. Missouri remains the lowest in nation, paying only $1.592 per gallon, while New York pays $2.30, the highest in the lower 48 states.

Alaska and Hawaii remain outliers as always, paying $2.865 and $2.858 per gallon respectively.