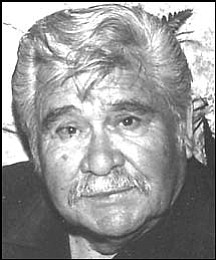 Ramon married Celia Castañeda in 1955. They moved to California, where their five children were born. They made their home in Simi Valley until Ramon retired from a career at Hughes Aircraft Co. of Canoga Park in 1993. Upon retirement, Ramon and Celia moved to Kingman.

Ramon was a parishioner of Kingman's St. Mary's Church, a member of the American Legion, and was a fourth-degree knight in the local chapter of the Knights of Columbus.

Ramon cherished his family life. He was a lover of Mexican music and was always the first one on the dance floor. He had a great sense of humor and found joy in the laughter of others.

He was also blessed with 13 great-grandchildren. Ramon also leaves behind his brothers, Fabian and Julian Ceniceros; and his sisters, Herminia Rocha, Angie Ceniceros, Julie Ceniceros, Rosalia Muñoz and Clara Ludena.

Visitation will be from 5-7 p.m. on Friday, Nov. 28, at Sutton Memorial Funeral Home.