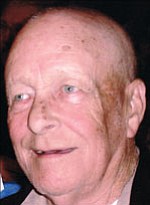 He is survived by his wife, Kathy Allen; son, Calvin Allen of Golden Valley; daughter, Dawn Amstutz of Show Low, Ariz.; and son, Eddie Allen of Kingman. He is also survived by a brother, Ronald Allen of Kingman and a sister, Judy Penland of Texas. He has 10 grandchildren. He is preceded in death by his father, Buster Brown Allen, and mother, Ruby Mae Allen.

He was a beloved husband, father and grandfather.

The family will have a private service.