From Tadpole to Toad 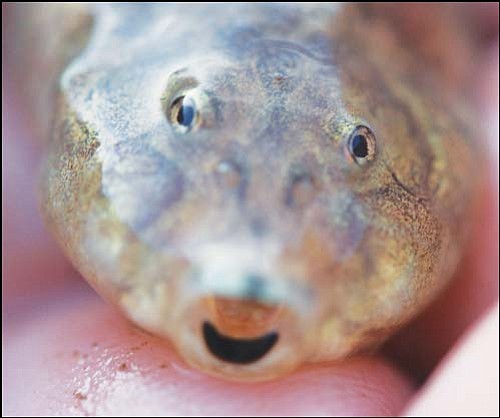 The life cycle of the New Mexican Spadefoot toad is depicted here.

Amphibians in the desert? It sounds strange, but it is true. The Kingman area is home to a few toad species that remain unseen most of the year. When the summer monsoon rains fall, loud, ringing calls echo through the night as toads seek to find a mate and breed. Spadefoot toads, or spadefoots, are not actually true toads but are in a class of their own. They have smoother skin than your average toad and the pupils of their eyes are vertical, like a cat's, whereas a normal toad's pupils are horizontal.

The most common spadefoot in the Kingman area is the New Mexico Spadefoot, or Mexican Spadefoot. Spadefoots are named for distinctive spade-like spurs on their hind feet, which enable them to dig into the soil.

Here, an adult (far right below large photo) New Mexico Spadefoot toad calls one night after the first major Kingman rainfall of the 2008 summer monsoons. The namesake "spades" are visible on his hind feet. Spadefoots spend most of their lives sleeping burrowed under the ground, only to be awakened by heavy rainfall. Normally dry washes and holes fill with rainwater. That's when the spadefoot males call loudly at the edge of a newly formed pond, or float on the water's surface and call, attracting females to them. They have little time to waste.

The amphibians breed and the females lay eggs on submerged plants or other objects they find, such as this devil's claw that happened to lay at the water's edge, seen in the photo below.

Eggs hatch within 48 hours of being laid and the larvae, called tadpoles, begin their race with the sun. If the sun evaporates the water before they can complete their metamorphosis into adults, they will die. Bottom photo, center, tadpoles create ripples on the surface of a pond near Kingman.

Predators soon discover a feast has appeared in the desert. Great blue herons (right), great-tailed grackles and other animals prey on the abundant tadpoles.

A close-up look at a tadpole (large photo at right), held by the photographer before being released back to the pond. This tadpole was much larger than most of its pond mates, indicating it may have been carnivorous or even a cannibal. A few tadpoles become carnivores, developing at much faster rates than the others and increasing their odds of developing into adults before the water runs out.