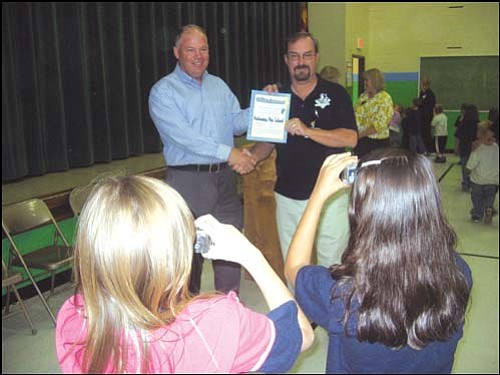 "Performing plus is a big deal for this area," Salem said.

Salem presented Palo Christi Principal Steve Hite with a certificate of achievement in front of students, staff and Kingman Unified School District administration at an awards ceremony on Friday.

"It's outstanding," Hite said of the ceremony featuring the mayor. "He takes time out of his busy day to recognize the school."

After two years of performing status, Palo Christi achieved performing-plus status. It was only one of two schools in the district to obtain that ranking this year.

"It goes back to the teachers," Hite said of the academic improvement, "continuing to keep the high quality teachers."

In his five years as principal, Hite said, he has only had to replace three teachers. With consistent staff, the school has been able to develop a community akin to a family, he said.

The Arizona Learns results from the 2007-2008 academic year were released on Oct. 8. They are available online at www.ade.az.gov.