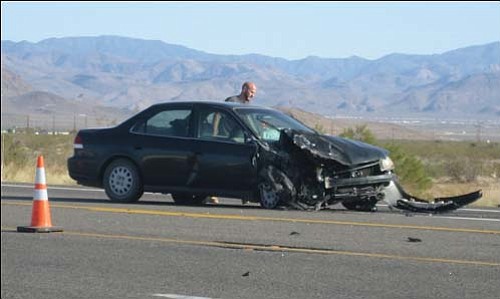 A four-vehicle accident involving a commercial van, a Jeep Wrangler and a Toyota Camry on Highway 68 in Golden Valley caused a minor traffic snarl Tuesday afternoon. The accident occurred at 3 p.m. near milepost 22. The van traveled down an embankment before coming to a rest. The black Honda pictured above was involved after the initial collision. Injuries were reported and treated at the scene. No victims were taken elsewhere for treatment. Traffic in the eastbound lanes of Highway 68 was routed into the center turn lane for about an hour while Arizona Department of Public Safety officers investigated the accident. The sequence of events that led to the crash is unknown and is still under investigation by DPS.