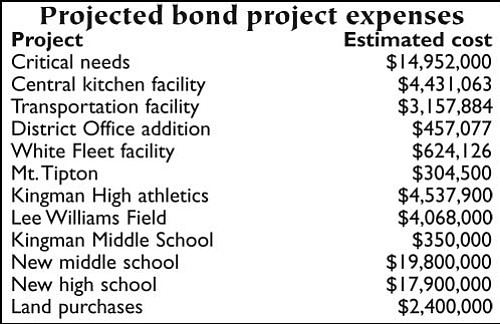 KINGMAN - With the fat trimmed from the bond projects, the Kingman Unified School District Governing Board is faced with taking a pound of flesh to afford a new high school.

Director of Construction Oz Enderby updated the board on bond projects and their budget at a workshop on Tuesday.

"When you see these numbers, they're all inclusive numbers," Enderby said.

Under the current proposed projects, there would be approximately $7 million remaining of the $79,990,000 voter-approved bond - not enough to cover the $10.5 million projected to build a new elementary school.

"We need to make sure that it's tight," Board Vice President Pat Carlin Jr. said of the bond budget.

The Board designated $22 million of the bond for construction of a new high school, scheduled to be completed August 2010. With the choice of the White Cliffs Middle School site, the board was able to save approximately $4 million.

"For the size of the high school, you cannot build one that size for less than $40 (million)," Superintendent Roger Jacks said.

The difference in price is going toward the construction of the new middle school. The school will cost approximately $20 million and is scheduled to be completed by December 2009.

A future elementary school will be constructed on the middle school site at the intersection of Airway Avenue and Prospector Street.

"I think it's important with the bond money to have another elementary school," Board President Dr. Charles Lucero said.

At a cost of $10.5 million, an elementary school with 300-student capacity can be built on the site. It would be built with the capability to expand to 600 students.

If the board wanted to just build a 600-student capacity elementary school, it would cost $13.6 million.

"I think it's important that we are looking towards an elementary school because in our bond we had one on there and we haven't done any on that," Board Member Terri McMullen said.

The Board is hoping to build softball fields also on the site in conjunction with the city.

It is important for the board to spend the designated money on construction because legally they can only adjust 10 percent from one goal to another, Budget Director Wanda Hubbard said.

"What that means is we're going to have to spend more for new schools or forfeit the money," Hubbard said.

The goals of the bond were to:

• Consolidate the transportation and maintenance facility.

A lot of the increased costs on the projects were the result of the selection of White Cliffs Middle School as the site for the new high school and an escalation in the cost of goods.

Additions had to be made to the food service kitchen and warehouse, the transportation and maintenance facility, and the district office.

A key cut the district can make is with the athletic fieldhouses at the high schools.

At the two high schools, the football fields will feature 1,000-seat bleachers and surrounding track.

The bleachers at the Lee Williams Field will be completed in May in time for graduation, Enderby said.

At Kingman High, both schools would use eight tennis courts. What are lacking are competition-ready softball fields.

Other options presented to the board included two portable classrooms at Manzanita, renovations to the Kingman High kitchen for the culinary arts, and water supply and storage at Mt. Tipton.

"You're looking at a (Capital Improvement Project) that was developed three years ago," Enderby said. "Our wants and our needs have changed over that period of time."