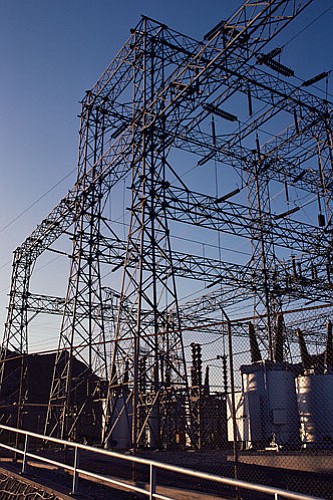 KINGMAN - Gasoline has fallen. Now it's electricity's turn. In yet another example of a silver lining on the current economic cumulonimbus, local electric rates are set to drop to their lowest levels in more than six years.

According to a recent filing made to the Arizona Corporation Commission, UniSource Energy Services' base rate for electricity will drop from 11.7 cents to 9.2 cents per kilowatt hour starting June 1. That equates to nearly a 21 percent drop in the average residential customer's bill, from $1,569 to $1,243 annually.

"Our rates will now be the lowest they've ever been under UniSource Energy Services," said Corporate Communications Director Joe Salkowski. "They will be lower than they were when UniSource Energy acquired the system from Citizens Utilities in August 2003."

The drop comes, not as a result of any action on UniSource's part, but rather because the cost of purchasing natural gas - and therefore, electricity - has dropped substantially over the last year. Due to the typical volatility in natural gas costs, the ACC approved a "purchase price and fuel adjustment" system several years ago that resets electricity rates once a year, based on the current market price for natural gas.

Now, however, the global recession has seen demand for gas and electricity fall to their lowest levels in years.

"Natural gas prices drive the cost of power and they have fallen as the economy has struggled," Salkowski said. "We are simply passing along a reduction in the price that we pay for power."

Salkowski said UniSource bills its customers based on two components. The first is for the cost of the power itself, the amount UniSource pays to purchase electricity. "The cost of power itself is passed along to customers without any markup. We simply acquire power at a market price and pass that along to our customers," he said.

The other component is the amount it costs UniSource to transport that energy to its customers. That, Salkowski said, is where UniSource actually earns its money, though he noted service costs have continued to increase while UniSource's rates have remained the same.

"The cost of providing, delivering that energy continues to rise, and our current rates currently do not cover those distribution costs," he said.

"Before long, UniSource will be requesting higher distribution rates that would take effect in 2010."

Salkowski said he still wasn't certain just how large a rate hike UniSource would seek for its distribution costs, though he believed it would not be as much as this year's drop in purchasing costs, and customers would still experience an overall reduction in their bills.

"I think it is still accurate to say our rates are lower than they've ever been under UniSource Energy," he said.

The pending drop in purchase rates was hailed by ACC Commissioner and former state representative Gary Pierce, who said it was fantastic news coming into the summer demand for air conditioning.

"Anybody who's living in a home and sharing the electricity bill, this is a good thing," he said.

"It just adds up to where people might be able to start affording a few things."

Just make sure to enjoy it while it lasts. UniSource's rates are set to change again on June 1, 2010.

If, by then, the economy has improved and the price of natural gas is higher, customers can expect their energy bills to follow suit.

UniSource rates to decrease, however ...
Commissioner vows gas-rate review
UNS: Electricity rates may jump 18% next year
It might take a lot of green to be 'green'
UniSource to seek rate increase