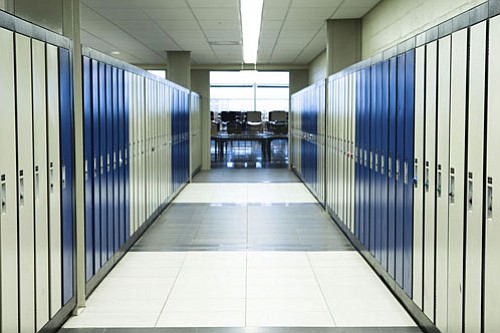 KINGMAN - Like many school districts across the state, the Kingman Unified School District Governing Board has decided to eliminate faculty positions, 20 in KUSD's case.

In a unanimous vote at their regular meeting on Tuesday, the board approved the reduction in force, retirements, resignations and reassignments recommended by the administration. "We regret having to do this, but with the budget situation we have, we have no alternatives," Superintendent Roger Jacks said.

The 20 teachers will be kept on a recall list for three years. On the list, the individuals would receive first priority for any positions that open in which they are certified. One teacher at Mt. Tipton set to be reduced benefited from the recall list and kept her position when another teacher at the school resigned.

The district's policy for reduction of certified staff is to rely upon normal attrition to meet reductions. If attrition doesn't meet the necessary reduction, the superintendent submits recommendations based off of:

• Past contributions to the educational program of the district

• All other things being equal, the length of service in the district

Beyond the 20 teachers reduced in force, the board accepted the resignation of 11 teachers and retirement of two teachers. As of Tuesday, a total of 12 teachers have resigned and four have retired throughout the year.

To meet the district's right-sizing goals along with pending budget cuts, the district has eliminated 57 total positions for next year through reduction, resignation, retirement and reassignment. Twelve of the eliminations were a direct result of the 300-student decline in enrollment, Jacks said.

With new federal stimulus money and increased grant funding for Title 1 and special education, the district was able to create seven new positions to reassign teachers to next year. In the new positions, the faculty will work with students in a basic skills class.

Eliminating teachers to meet budget cuts is a decision several school districts across the state have chosen or are considering.

With a school in Bullhead City and one in Mohave Valley, the Colorado River Union High School District has given more than 20 teachers reduction in force notices, Superintendent Nancy Silk-Sinagoga said.

"It's the most unfortunate thing and hardest thing to do," she said. "And, it's one of the hardest things for a superintendent to recommend."

First-year teachers comprise the reduction. Math and science teachers were spared the loss. "It is something we don't want to do," Silk-Sinagoga said. "We don't want to lose these teachers."

Today's News-Herald reported that the Lake Havasu Unified School District identified 28 teachers for cuts. The chosen are under emergency certifications or are in their first or second year. The board could decide at their next regular meeting on Tuesday.

The Dysart Unified School District in Phoenix has selected more than 175 teachers and administrators to eliminate in the face of $20 million in potential budget cuts from the state. The decision came on Wednesday.

"Our hope is to hire all of the teachers and administrators that are receiving notices back as soon as possible," said Superintendent Dr. Gail Pletnick. "Unfortunately, we have to wait until the Legislature provides a budget for the upcoming year before committing the district to the expenditure of funds."

The Arizona Republic reported more than 300 first- and second-year teachers and staff were laid off from the Peoria Unified School District. Mesa Public Schools notified 208 teachers of their non-renewal. The Apache Junction School District cut 49 teachers.

All of these layoffs are being announced in advance of April 15. According to Arizona Revised Statutes, districts must notify teachers by April 15 if their contracts are not being renewed.

With seven schools, one district in Arizona is planning not to cut teachers. Bullhead City Elementary School District Superintendent William L. Allsbrooks said the district is looking to make other cuts to prevent the elimination of teachers.

"We mostly trimmed hours from classified contracts, instead of trying to cut jobs," he said.

In February, they cut hours of the classified staff and shut down several schools during spring break to meet a 2 percent reduction advised by the Arizona Department of Education.

"We hear rumors of what is going to happen," Allsbrooks said. "We've been told to count on as much as 8 percent total, which includes the 2 percent we actually cut."

Allsbrooks will present information to the Bullhead City Elementary School District Board today regarding a worst-case budget scenario for the district. The board already created a list of priorities for the administration in the face of budget cuts.

The plan Allsbrooks will present does not cut any teaching positions, he said. "I'm very pleased we were able to do that," Allsbrooks stated. "Obviously, it required a lot of work."

As a charter school, the Kingman Academy of Learning is not bound by the April 15 deadline or any deadline for notification of non-renewal of contract for teachers.

"If we ever had to let people go, we would give them sufficient notice," said Susan Chan, administrator for the district.

The district doesn't plan to cut any teachers, she added. "Until we know for sure what our budget is, we won't cut teachers," Chan said.

The district is monitoring budget discussions at the state and is awaiting the Legislature's decision for next year's funding.

"We told our teachers as soon as we know, we'll let you know," Chan said.