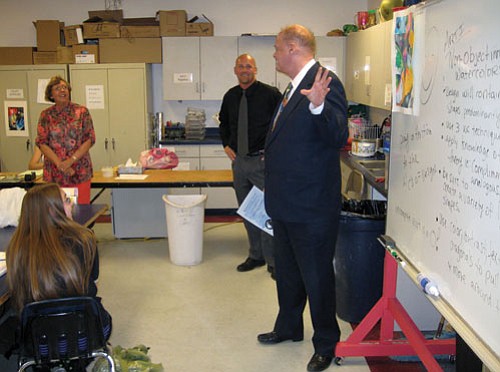 "I know I'm looking at the future leaders of our state because of your AIMS scores," Horne said to the assembled Palo Christi students.

Horne took time to recognize the students, teachers and parents for the Performing Plus-designated school.

From Palo Christi, Horne traveled to the Kingman Academy of Learning, where he recognized the primary and high schools for achieving Excelling and Highly Performing status, respectively, on the Arizona Learnstests.

"One thing I've learned in my six years of office is great students come from great teachers and a great principal," Horne said to the primary students.

At the high school, Horne toured the campus, examined projects in the art class and gave a history class the opportunity to stump him on historic facts.

Horne finished his day attending the KUSD Governing Board meeting. There, he recognized the district's arts education program.

Horne pointed to the variety of arts education classes, being the first district to work with the Department of Education in training arts educators on the revised arts standards adopted in 2006, leading state professional organizations, and partnering with the community. "A student who has not learned the arts we inherited in the past centuries has not had a full education," Horne said.

In between visits, Horne took the opportunity to speak with the Miner about issues facing education in the state.

"Budget is the big issue right now," Horne said. "I've been trying to get the schools not to overreact."

One overreaction Horne said he has noticed is the large amount of terminations of teachers by school districts. He has been recommending districts keep personnel cuts around 5 percent, if they have to make any at all. The reason for that number is the drop in next year's budget for the Arizona Department of Education.

Beyond keeping staffing, Horne said he is a supporter of all-day kindergarten. The Republican was a part of the bi-partisan effort to establish state-funded kindergarten in 2004.

Horne pointed to studies that found reading gaps between students in first grade significantly increase as they progress through school.

"It's very important that we have all-day kindergarten to close that gap and have academic success," he said. "As it turns out, a lot of kids are learning to read in kindergarten, which would be impossible with a half day."

Horne said he is expecting a 2 percent drop in the budget. Horne is projecting the department to see approximately an $800 million decrease in funding from the state, though the federal stimulus would cover around $600 million of it.

Horne has been active in the legislature during the budget process.

"My main message has been we need to protect our future," Horne said.

Currently, Arizona ranks among the nation's lowest states for money spent per pupil. Even in the face of the ranking, Horne said there is a positive with the Arizona students' test scores rising above the national average.