Maymie Jannet Moulder
In Memory Of... 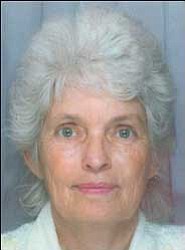 Maymie Jannet Moulder, 68, of Montrose, Colo., passed away late Monday evening, April 6, 2009, at The Homestead of Montrose, with her loving family by her side.

Maymie was born Dec. 20, 1940, to Polk "Eph" and Ada Nancy (Conell) Fancher in Victorville, Calif. Maymie spent most of her childhood and attended school in and around Prescott and Kingman, spending most of her childhood on ranches where her family worked. Living on these ranches gave Maymie a great love and respect for the outdoors, including horses and cattle. Maymie married Eldon Sandsness in 1958; they later divorced in 1982. She then married William Moulder; they divorced later.

Maymie is also survived by her brother, Ben Fancher of Cottonwood; two sisters, Ada Ann Heckthorn (Dan) of Chino Valley and Fay Wadlow of Skull Valley; 21 beloved grandchildren and 20 precious great-grandchildren. Maymie is preceded in death by her parents; one sister, Margie; one granddaughter, Brittany Homedew; and one great-grandson, Cody Hegge.

At Maymie's request, cremation will take place and a family memorial service will be held this summer in Kingman, where her ashes will be laid to rest with her family there. Arrangements are under the direction and care of Crippin Funeral Home, 802 E. Main St., Montrose, CO 81401; (970) 249-2121.