James T. Byrne
In Memory Of... 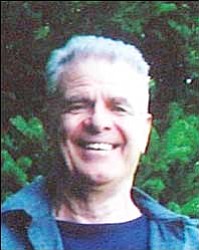 James was born in Brooklyn, N.Y., on Oct. 3, 1939, the son of Martin and Helen (McDonough) Byrne. He served in the U.S. Army from 1956 to 1959 and was a 1972 graduate of Dominican College at Racine, Wis. He retired from the City of Milwaukee Health Department in April of 2001 and then returned to New York state and settled in the beautiful Adirondacks he visited as a child.

He enjoyed traveling, reading and listening to music. He loved to run and work out and was a great fan of baseball and soccer.

James was preceded in death by his parents; a sister, Lorraine Hackney; and a brother-in-law, James Kessell.

He is survived by Mary, his wife of 36 years; a daughter and son-in-law, Leah and Mike Widder of South Milwaukee, Wis.; a son, Shawn Byrne of Kingman; two granddaughters, Heather Zielinski and her husband James of Racine, Wis.; and Stormy Rose Byrne of Kingman; two grandsons, Kyle and Kasey Widder of South Milwaukee, Wis.; one great grandson, Aiden James Zielinski; three sisters, Carolyn Cagle and her husband Roger of Franksville, Wis.; Helen Kessell of Maryville, Tenn.; and Marilyn DiMaggio and her husband Pete of Des Moines, Iowa; one brother and his wife, Martin and Beverly Byrne of Tuscaloosa, Ala.; and several nieces and nephews.

At his request, services will be private and at the convenience of his family.

Arrangements are in the care of the R. W. Walker Funeral Home.