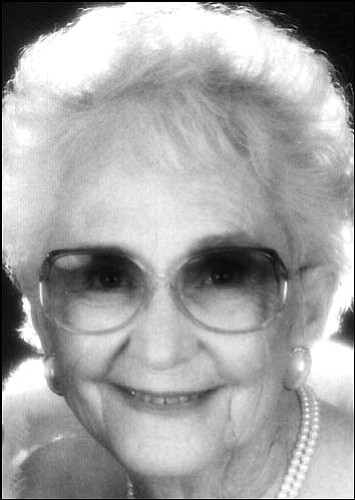 Mary Lou Braffet Roe passed from this life Wednesday, July 29, 2009, in Kingman just one week before her 93rd birthday. She was born Aug. 7, 1916, in Woodward, Okla., to Betty Louise Coombes and Peter Joseph McDermott.

Raised in a railroad family, she lived in many places throughout the western U.S. including Salinas, Lancaster, Los Angeles and Marysville, Calif., as well as Jerome, Mayer, Wickenburg and Wikieup, Ariz. The family moved to Kingman in 1929 when she was 13 years old and she spent most of the rest of her life in Mohave County. She met Virgil "Casey" Braffet at a dance in Wikieup and they were married in Williams on Sept. 29, 1931. They eventually moved to Davis Camp where Casey helped construct Davis Dam until World War II took him away for three years. During that time Mary Lou moved back to Kingman and worked at Citizens Utilities as a telephone operator. After the war the young couple and their three children returned to Davis Camp where construction on the dam was continuing. Many wonderful friendships were forged during those years and happy memories made. Three more children would be born to the Braffets after the war, making a total of six.

Tragedy struck in December of 1953 when Casey died, unexpectedly, of a heart attack at a young age, and Mary Lou was left to raise her six children alone. Returning to Kingman, she once again worked as a telephone operator and a few years later married Leslie Roe, who was also a long-time Kingman resident. They were married until his death in 1996.

Mary Lou was a lovely and multi-talented person who could design and sew patterns to perfection, crochet, knit, paint, sing and play the piano. She was a voracious reader and an avid crossword puzzle fan. She loved traveling as well as boating, fishing and sometimes hunting with Casey. She especially loved watching as her grandson raced his truck in desert races and was an avid Diamondbacks fan. She had a lust for life and was interested in everything that went on and read newspapers thoroughly, from front to back, and happily shared that information with everyone around her, which was quite a family joke. She kept us all well informed. Mother taught us correct principles and social graces that have enriched our lives and allowed us to be comfortable in any setting we found ourselves.

She was an active member of the Church of Jesus Christ of Latter-day Saints and held many positions including in the Stake Relief Society, Sunday School, Young Women, and she loved singing in the choir.

She loved and adored her many grandchildren and great-grandchildren, and delighted in their accomplishments. She loved having them come visit her and always had a little gift hidden away just for them. They loved her as well, and their special name for her was GG (Great-Grandmother).

Mary Lou worked several jobs during her life as a telephone operator and also as an assistant at a local optometrist. She was a dedicated employee and enjoyed her jobs, although her favorite was that of mother, grandmother, GG and loving friend to many.

Mary Lou was predeceased by both of her parents; her three siblings, Helen Hart-Martin, Jim McDermott and Ward McDermott; her husbands, Casey Braffet and Leslie Roe; by a grandson, Gary Rubio; and a great-granddaughter, K'lee Kristine Duey.

She is survived by and cherished by her children, Ted (Cheryl) Braffet of Point Roberts, Wash., Bette Baldwin of Lake Havasu City, Christine (Albert) Rubio of Kingman, Peggy (Jack) Duey of Kingman, Jim (Theresa) Braffet of Greensburg, Pa., and Nancy (Kirk) Hawkins of Vancouver, Wash.; stepdaughter, Katherine (Elvie) Henderson of Bishop, Calif.; along with 21 grandchildren; and she was also blessed with many, many great-grandchildren who will all miss her.

Services will be held at 10 a.m. Monday, Aug. 3, at the LDS Stake Center on Eastern Ave. in Kingman. A viewing will precede the service at 9 a.m. Burial will be at Mountain View Cemetery and a reception/luncheon will be served at the church immediately following the burial.

God be with you 'til we meet again, Mama. We love you most!