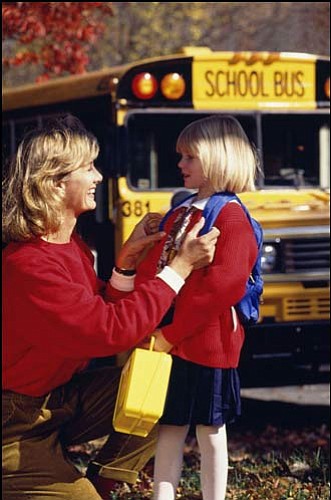 KINGMAN - More than 7,500 area children will head back to school over the coming week when the Kingman Unified School District officially opens for the 2009-2010 academic year Thursday.

But while most things will be as they've always been, district Superintendent Roger Jacks said students will be subject to a few significant changes this year.

Scheduling is likely to be the biggest headache for returning students and their parents, as nearly every school in the district has had its start and end times changed in some way, from a few minutes' difference to shifts of an hour or more.

"We did go through some changes this year with new start times for all of our schools," Jacks said.

Jacks said the scheduling changes were made in order to make the district's busing system more effective, since the previous start times had made it difficult for drivers to make it from one school to the next on time.

The biggest change will come to Palo Christi Elementary, which will begin at 9 a.m. and let out at 3:45 p.m. - more than 80 minutes later than it did last year.

Hualapai Elementary, meanwhile, will begin an hour earlier, starting at 7:35 a.m. and letting out at 2:20 p.m.

Mt. Tipton is the only KUSD school to remain unaffected by the scheduling changes, continuing to start at 7:50 a.m. and let out at 4:15 p.m.

"Some of it had to do with our high school where we were getting some delays, and it was delaying some of the pickups for our elementary schools," Jacks said of the new starting and ending times.

"We tried to streamline some of our busing operations so we were a little more efficient on our routes."

The other major change students will see this year will be in the facilities themselves. Jacks said the district made progress on some long-overdue maintenance issues over the summer.

"Things that haven't been done for many, many years have been redone over the summer time," he said. "Heating and air-conditioning systems have been either refurbished or replaced. There's new carpeting, new tile and new paint - Hualapai and Cerbat got refurbished in those things. Manzanita got all new tile floors, and a lot of schools got bathrooms redone over the summer."

In addition to new bathroom fixtures, Jacks said Kingman High School has been fitted with energy-efficient lighting systems he estimated would save the district upwards of $60,000 in annual electrical costs. And while it still has a ways to go, Jacks said the new White Cliffs Middle School currently under construction at Airway Avenue and Prospector Street is several weeks ahead of schedule and thousands of dollars below projected costs.

"We were hoping to have it turned over to us by the end of the semester on Dec. 4," he said. "But lately, our contractors have been telling us we should have the school by the latter part of November, so we're really excited."

While enrollment remains steady and the district fully staffed, Jacks said he did have some concerns over keeping the student to teacher ratio as low as possible. This year, the district anticipates 25 students to every teacher from kindergarten through second grade, with the ratio rising to 27:1 for third through fifth, 30:1 for sixth through eighth, and 32:1 for high school.

"We realize at the beginning of school we'll have some classes that are larger, some that are smaller," Jacks said.

"It'll take a few weeks to get that balanced, but we will. As soon as our budget comes into line, we're dropping that (ratio) down two to three students per class."

In the meantime, as the youth of Kingman enjoy the last fleeting hours of their summer vacation, the desks have been polished, the buses stand at the ready and a phalanx of teachers have already filed their first lesson plans of the year.