Dispatchers, cops track down garbled distress call
Clues came in bits and pieces from Kingman man suffering from a seizure 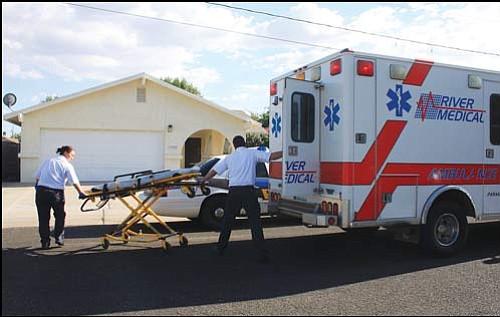 JC AMBERLYN/Miner<br> River Medical Ambulance personnel prepare to pick up the 911 caller Wednesday on Davis Avenue. It took Kingman Police and dispatchers over an hour to ascertain who the distressed caller was and where he lived.

To make matters worse, the man calling for help was in distress and unable to provide dispatchers with his location. Dispatchers believed he was experiencing a seizure, but couldn't understand what the man was saying. Three different times the caller hung up and then called back, but police still weren't sure where he was calling from.

For 80 minutes dispatchers stayed on the line trying to understand what the man was saying. At one point dispatchers thought they heard the word "Davis," and so they responded to Davis Avenue off of Stockton Hill Road and began driving up and down the street, blasting their sirens every few seconds to see if the man could tell dispatchers if the sound was getting closer to him or farther away.

Officers with the Kingman Police Department responded to one specific address, but that turned out to be the wrong house. Lt. Rusty Cooper said emergency personnel got creative in their pursuit, especially after it sounded like the man's condition was worsening.

"There was a lot of confusion and uncertainty if it was even on Davis," Cooper said. "At one point the dispatcher thought they heard the word "bank," but we didn't know if that meant he was near a bank or on Bank Street."

Eventually the man was able to provide his wife's name and the fact that she worked at a local utility company. Police reached the wife and she gave them an exact address. At about the same time, police on Davis Street were working with dispatchers to track down a barking dog they could hear over the phone.

When police finally were able to locate the man in a bedroom in his house, the dog that they heard over the phone became protective of him and wouldn't let officers near him. Police eventually backed the dog into a bathroom and got the man the medical help he was calling for.

A relative said the man had a seizure condition but that he is expected to be OK.