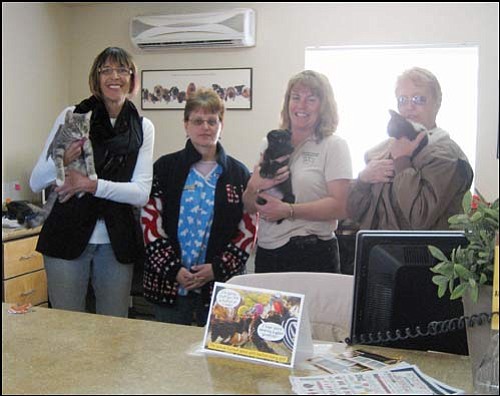 KINGMAN - Things are looking up at the Mohave County Animal Shelter in Kingman, since Western Arizona Humane Society took over operations of the shelter in August. The shelter has been cleaned, painted, remodeled and restaffed.

The entire front office was gutted and redesigned to be more welcoming and efficient, said WAHS Director Victoria Cowper. New phones, computers and alarms were added.

"We had a lot of volunteer help," she said.

Office hours were changed and an emphasis was placed on customer service.

"I love the Sheriff's Office," Cowper said. "But this isn't what they were trained to do. We're experts in animal welfare. We deal with highly emotional situations. People may be turning in a pet, adopting a pet or trying to recover a pet."

At the same time, the number of animals coming into the shelter has increased, she said. In October, the shelter took in 648 animals, 203 were stray animals, 160 were cats and 103 were dropped off because the owner had too many animals.

The shelter also had to euthanize 97 sick or injured animals, 28 animals that simply weren't adoptable because they were too hostile or wild and 80 animals to make room.

"There are many people who will say that we're cruel, we're doing it wrong or that animals don't have to be euthanized," Cowper said.

The National Humane Society, which WAHS is a part of, approves of only two ways to euthanize an animal, by intravenous solution or intrapulmonary, she said. In each case, a certain protocol and procedures must be met and followed. Two people must sign off on the procedure and two people must attend to the animal, Cowper said.

"It's calm, not rushed, with as little stress to the animal as possible, she said.

WAHS would like to reduce the number of animals it has to euthanize, but the small size of the Kingman shelter does not help, Cowper said. The shelter was built in the 1970s for a much smaller community. It can hold about 40 dogs and around 30 cats. WAHS will take any animal that is brought into the shelter. The shelter can get in more than 80 animals in a day, she said.

Pet owners are not spaying or neutering their animals, the animals get loose, breed and create more animals, she said. WAHS is trying to help the situation; all animals adopted from the shelter are spayed and neutered. The cost of the surgery is included in the adoption fee.

WAHS is planning to start a spay and neuter public education program in the next few months. The organization is also working on getting a state grant from the sale of pet-friendly vehicle license plates in order to help pay for spay and neuter coupons.

"Even if we had unlimited funds and resources, we would still have to euthanize some animals," Cowper said. Some animals are simply too wild, too hostile or too sick.

WAHS is advertising animals on PetFinder.com, CARE-Net and other rescue shelters and through Friends from the Pen, a program with the Arizona State Prison-Kingman in order to find homes for animals. It is also working with Petco and plans to do fundraising in the future to gather more funds for the shelter.

Cowper encourages residents looking for a pet to consider the shelter. There are many ways for someone to get a pet; by going to a breeder, picking one up at a pet store or at a person's home. The shelter gets not only mix breed animals, but purebred dogs and cats, kittens and puppies.

It costs $60 to adopt a dog and $45 to adopt a cat. Pet licenses for dogs are an additional cost. Residents can pay $10 to put an animal on hold while they think about bringing the animal home. Residents can even put their name on a wish list for a specific breed. If that breed comes in, the shelter will notify the resident.

A new service WAHS hopes to put into place in a few weeks is start to microchip all animals that are adopted out of the Kingman shelter. The service will be provided for a $20 fee and will only be available to residents who are adopting a pet from the shelter.

Cowper encourages pet owners to call the shelter if they think their pet is missing. All animals with microchips or tags are put on an adoption hold for at least 72 hours as staff tries to contact an owner.

Microchips can be a big help in locating a pet's owner, she said. Residents who have microchipped pets should check to make sure that the registration for the pet is up to date. There have been numerous times when the shelter staff has scanned a pet, found a microchip and then found that the pet was never registered and there is no information to locate the owner.

WAHS is also working on updating their Web site to include animals up for adoption.

"We're trying to be flexible with the public and responsible to the animals," Cowper said. "These are four-legged members of our community."