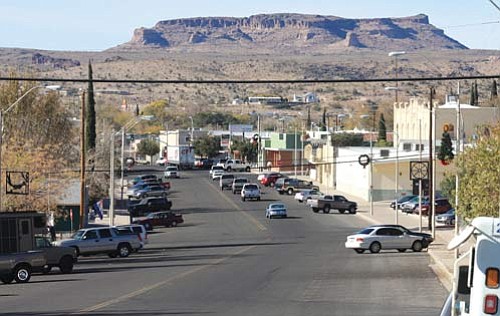 KINGMAN - A downtown streetscape improvement project, once seen as among the most affordable on Kingman's extensive list of capital improvement projects, looks likely to remain on hold for at least another year or more, according to one of the project's strongest proponents.

The downtown streetscape project would consist of new curb extensions, landscaping, handicapped ramps and crosswalk improvements to enhance the "walkability" at each of the Beale Street intersections from First to Eighth Street through Kingman's historic business district. City Councilwoman Robin Gordon has been among the project's most vocal advocates, arguing that such improvements would be among the cheapest ways of adding value to the city and drawing tourists to the downtown area.

"I think it would be a huge step in the direction to making downtown look like it could look and to attract not only locals but also visitors to downtown," Gordon said. "I attend the Downtown Merchants meetings regularly and they have been very supportive of this project. The problem we fall back to is who's going to pay for it."

With the city coffers currently stretched tight, several councilmembers floated the idea of going to the property owners along the proposed streetscape route and asking whether they would agree to join an improvement district.

According to Public Works Director Rob Owen, the response was not encouraging.

Robin LaRue, who owns the Unity Church property at 615 Beale St., was one of those "no" votes. As a landlord, LaRue said the recession has caused her property to go for months at a time without tenants, and she worries that joining an improvement district would only force her to raise her rents further, since her portion of the cost would be upwards of $10,000, based on the lineal frontage of her property.

"There I am stuck with the largest frontage along the street that's privately owned," she said. "It's an old historical house, and I don't get huge rent. Nobody's getting huge rent right now."

LaRue questioned how the streetscape project would benefit her, since she does not own a commercial business and contended that the sidewalk improvements would likely disrupt her tenants' ability to get in and out of the property. "This is not the time to do this," she said. "This is a terrific burden in these hard economic times for people who own property along there."

Gordon agreed that property owners shouldn't be the only ones to pay for the project, which is estimated to cost as much as $80,000 per intersection. Ideally, she said, she'd rather see the project funded by a combination of contributions from the property owners, the city and some external funding source, such as grants.

"That's the way I would recommend it," she said. "I don't think it's realistic that the property owners would foot the whole bill."

She noted that the project could be done in phases, limited at first to just the most business-heavy sections of Beale Street from Third to Fifth. Such a move, she said, would produce the most immediate benefit without hurting homeowners further up the street and would also give them a working preview of how the whole street could appear someday.

"If we did a smaller section, it would give everyone a way to see what the impacts would be," Gordon said.

But even that won't be likely anytime soon following the state's announcement that it will pull more than $800,000 in shared revenues out of the city's coffers next year. Gordon said it's unfortunate, since now would be the best time for the city to save money on the costs of labor and building materials.

"I think we could do it now for a better price because everything we've put out has been under bid," she said. "But realistically, right now I think we have to prioritize what the most important services we can provide to the community are."