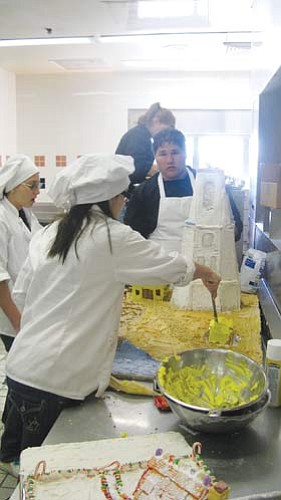 KINGMAN - Hansel and Gretel wouldn't know what to make of these gingerbread houses.

The display is ordinarily part of an annual contest through the Downtown Merchant's Association, but even after this year's contest stalled, the students were still eager to build the creative homes.

"You can see by their work that they really got into it and enjoyed it," said Chef Michael Gaul, who heads the class.

Alex Mayo, who created the lighthouse with classmate Amy Webb, was especially excited to participate again this year after taking home Best in Show prizes last year with his version of the Eiffel Tower. Gaul said Mayo's tower won the People's Choice award by one vote over a gingerbread cabin that allowed people to view a holiday scene inside.

The cabin was so intricate that the students who worked on it used tweezers to put icing on the wreaths that decorated the home.

There are no cash prizes this year, but that didn't stop the students from getting creative with gingerbread, no matter how difficult the medium.

"The reason there's only five houses out of 70 students is because it's pretty tricky," Gaul said. Gingerbread can get burnt in the oven and walls can collapse when the icing is too thin.

The houses are made of all edible material but can be kept indefinitely. Gaul said he recently disposed of a gingerbread house from last year that he used this year as an example for the students.

This year's gingerbread homes were made by Mayo and Amy Webb, who crafted the lighthouse; Enrique Cadena, who made a SpongeBob Squarepants house; Olivia Delk Hogie and Cassandra Herndon, who made a Smurf house; Sommer Ang, who made a winter cottage; Monica Morris and Kayla Clayton, who made hunting shacks; and Morgen and Jordyn Schreiner, who made houses.

Run, run as fast as you can to 'Gingerbread Mania'
KHS beefs up number of contest entries
Mayo cooks up a career at KHS
Chef challenges community with gingerbread competition
Gingerbread creations come to life for Kingman students