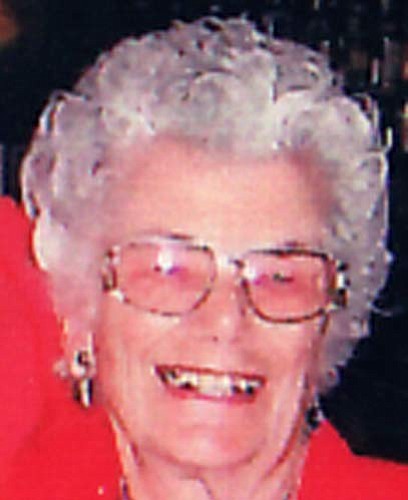 The Lord called Elaine Karen Woodrum Petry to rest on Friday, Dec. 18, 2009, in Kingman. Born Elaine Degnes in Albert Lea, Minn., on Aug. 4, 1921, Elaine and her family moved to the Chicago area where she grew up and graduated from Leyden High School. Her strong sense of patriotism led her to enlist in the U.S. Navy during World War II, serving as a Navy WAVE until 1946. During this time she met John "Woody" Woodrum, also in the Navy, and they married in 1946. This marriage brought them two sons, Curtis Woodrum and Craig Woodrum, and a busy life in Illinois before retirement in Florida until Woody's death in 1984.

In the early 1990s, after the deaths of their spouses, Elaine Woodrum and Russ Petry became reacquainted at a Leyden High School reunion. This reconnection led to their wedding on May 16, 1993. Together they enjoyed extensive traveling and settled into spending summers at Elaine's home in River Grove, Ill., and winters at Russ's home in Kingman. Elaine was very active in her River Grove and Kingman churches; in the tab collection program for Ronald McDonald House; Telephone Pioneers Hug-a-Bear Program; and was always the number one cheerleader of activities in which her friends and relatives became involved.

Elaine's lively and generous spirit was reflected in her passionate patriotism and dedication to the military, her pride in her Norwegian ancestry, her loyal and enthusiastic connection to her many friends, and her strong faith in her Savior.