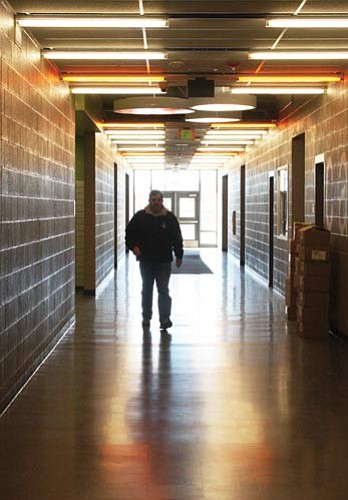 KINGMAN - While its winter break is only halfway over, White Cliffs Middle School's transition from its old campus downtown to the new campus on Prospector Street is already mostly complete.

According to Kingman Unified School District Superintendent Roger Jacks, most of the teachers at White Cliffs took advantage of the first few days of their vacation to pack up their classrooms for transport to their new digs. Likewise, many of the school's administrative and technology components have already been installed well in advance of the new campus's opening on Jan. 4.

"It's coming along really well, and we think we should be ready to open without any problems," Jacks said. "The library's already set up, the computer labs are set up. The administration area is just about ready to go. It's looking really good. We don't see any show-stoppers at all."

While teachers were given the responsibility of packing their classrooms up, CORE Construction Services, the Phoenix-based firm responsible for the new middle school's construction, is handling the actual move. When school does reopen a week from Monday, Jacks said everything should be exactly the same as it was before except for the location - same teachers, same classes, and the same 700-plus students coming from the same coverage area.

The only major challenge he expected was students' conforming to the school's new bus schedule, which was sent out prior to the end of the semester. Jacks said that any parents with questions about their student's bus route can call the district transportation office at (928) 753-5928.

Following its first few days in session, the new White Cliffs campus will hold a grand opening to the public at 3:30 p.m. Jan. 13.

Once the new campus does open, Jacks said the district will have about a month to clear the remainder of its property out of the old White Cliffs campus at 400 Grandview Ave., after which the building will be turned over to CORE Construction for a complete conversion into the new Lee Williams High School, which is anticipated to open in the fall of 2011.

"They're gutting the interior of the 'A' building," Jacks said. "The cafeteria there is basically being torn down to just the metal frame, and then the new cafeteria will be built. Plus, we'll be building a new gymnasium and wrestling and weight room."

With the high school still nearly two years away, Jacks said the district remains uncertain how the new school will be set up - what electives it will offer, whether it will require the district to hire new teachers, and which students it will initially be open to.

"It's a delicate balance, there's no doubt about that," Jacks said. "We're going to have some workshops with the board in the springtime. I'd like to have the first workshop probably in the March/April time frame to start talking about some of the alternatives regarding the structure of the student body, the courses we would offer there and the career technical education programs."