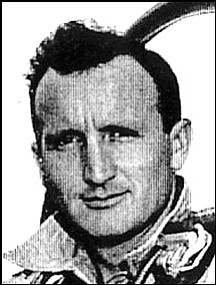 Joseph M. Kinkella had his first flying lesson at age 12 in his hometown of Kingman. The next year his father, Tony Melles, purchased a Porterfield 70 HP model 35. By the time Joe reached age 16 and was allowed to solo, he had accumulated more than 200 flight hours.

Joe took Basic in Miami Beach, Fla., and then went to Santa Ana pre-flight, Primary at Tulare (PT17), Basic at Merced (BT-13), and after graduation at Luke did the P-40 trans. and Gunnery at Ajo. Joe stayed at Luke as an instructor in the AT-6 and also as gunnery instructor at Ajo. He left the service in October of 1945.

Joe then enrolled at General Motors Institute-Engineering, Flint, Mich., from 1945 to 1948. During this time, Joe had purchased a P-63 and he entered the Bendix National Air Races in 1947. He then spent a couple of years instructing and in a charter service.

He went to work for the state of Arizona as their first civilian pilot and to test the feasibility of aircraft use by the state. Recalled in 1950, he became flight test maintenance officer at Tyndal and Elgin AFB, Fla. '51 F-86D project Pilot, then in 1953 Project Test Pilot on the new supersonic F-102.

Following a 1 p.m. service at Mountain View Cemetery, our family welcomes all to join us at the Brunswick Hotel next to the "Sportsman" in Old Town Kingman.