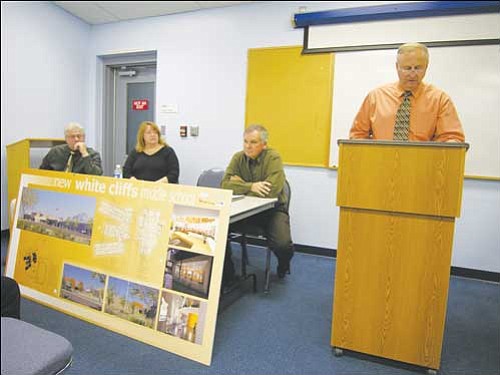 KINGMAN - Administrators and board members from the Kingman Unified School District spent about 90 minutes Wednesday night giving the public a snapshot of the district's current financial status, as well as detailing the economic, educational and administrative challenges of the upcoming school year.

Hubbard said much of the deficit would be filled by a $600,000 emergency fuel reserve fund the district created last year, when skyrocketing gas prices sparked fears that the district might be unable to afford to maintain its busing schedule.

The rest of the shortfall, she said, would be covered by retaining the district's current textbooks for an additional year, rather than buying new ones.

"We're going to have the schools use the same books they're using this year for one more year and see how it goes after that," Hubbard said.

"What that means is, we will end the year in the black and we will make payroll, so if you're hearing about things happening this year, we have no layoffs planned for the year."

For fiscal year 2010, however, Hubbard gave some grim accounting. With the state expected to incur a $3 billion shortfall, Hubbard said schools should expect the Legislature to enact a statewide cut of at least $1 billion next year, which is actually less than proportional.

Hubbard noted, however, that the state is expected to receive approximately $4.6 billion from the American Recovery and Reinvestment Act, also known as the stimulus. Of that, approximately $1.2 billion would go to education, though Hubbard was quick to point out that category covers all education from pre-kindergarten to post-graduate colleges, not just K-12 schools.

Additionally, Hubbard said many unknowns still surrounded exactly how and when the stimulus funds would be divvied out over the next two years, how eligibility would be determined, and what kinds of spending restrictions would be imposed on the monies.

"The other thing that we don't know is how much of that $1 billion state shortfall will remain after the federal stimulus package gets all worked through and how much of that would be passed on to our school district," she said.

Hubbard also noted that, due to decreasing enrollment and other grant funds drying up, the district would incur an additional $1.9 million in additional budget cuts at the local level, including for the English Language Learner program and the Medicaid in Public Schools program. Nevertheless, Hubbard said the lack of funding would not reduce the level of programs the district must provide its students.

Hubbard also revisited the issue of "right-sizing" - making staffing changes to reflect "appropriate staffing levels" based on the number of students, schools and employees in the district. In the current school year alone, Hubbard said, the district had eliminated the positions of 18 classified staff, one district administrator and six teachers, using a ratio of 22 students to one teacher for grades K-3, and 25-to-1 for grades 4-12. "Now what we're looking for next year is actually modifying that classroom size," she said. "We would still keep 22-to-1 for kindergarten through second grade and 25-to-1 for third through fifth grade."

"I know 29 sounds like a lot, but remember we have 10 schools, so you're spreading 29 teachers across 10 schools," Hubbard added. "We believe, very strongly ... that we'll be able to get all or most of that through attrition."

With enrollment expected to drop by about 300 students next year, Hubbard said the district plans to eliminate another 12 teaching positions, also hopefully through attrition. In all, Hubbard said the staffing cuts should save the district $2.1 million, covering the $1.9 million it expects to lose at the local level.

"All schools will develop and implement a school achievement plan, and all schools will develop a remediation plan for academically struggling students or those who fall below grade level," Jacks said. "The focuses that we wanted to make in particular were two things; we wanted to improve our educational system by sharpening our instructional focus in the classroom and also by improving the quality of our teaching in the classroom."

In order to meet the rising standards of the national No Child Left Behind act as well as the state's "Arizona Learns" standards, Jacks said the district is collaborating as a team to focus on teaching to the standards, using in-class technologies and progress-measuring tools to best determine how individual students are faring. Jacks also described the many other standards schools are required to meet to be deemed performing, versus underperforming. Jacks noted that schools can be deemed underperforming simply by missing any one of a wide range of testing requirements, such as the requirement that at least 95 percent of all students in all demographic groups take the AIMS standardized test.

"Our ELL students - English language learners - that's a separate category and they have to meet the 95 percent testing in that standard," Jacks said. "We also get graded on how well they do on the English language learners test, which is called the Azela, that is in there, too. And then on top of all that, we also have to meet a standard every year that is called 'the measure of academic progress.'

"That's the challenges that schools have nowadays that goes on all year long, trying to make sure we meet all those standards," Jacks added.

Jacks said that while he felt some standards of the No Child Left Behind act were unrealistic and did not provide the funding to assist in meeting them, he felt the act had helped to raise the bar of education in the district, and he enthusiastically agreed with President Barack Obama's statements on Tuesday evening that education is crucial to maintaining America's competitive edge in the global economy.

"I really liked what he said about if you have a student drop out of school that they've not only let themselves down, they've let our country down," Jacks said. "I really liked that, and I think the situation is that terse for us in today's world."

Asked how he expected to improve education despite further staffing cuts, Jacks said the district would have to make a concerted effort to maximize the educational value of every moment in the classroom.

"In the classroom, we have to make sure we're giving quality education every period of the day," he said. "We just have to do a better job of using the tools that are available to us to assess where the students are with their learning and where they need to go with that learning."

Another questioner asked about the feasibility of switching the district to a four-day week. Assistant Superintendent Wanda Oden said the district had developed a committee to study the issue over the past three months, and that the public would have a chance to speak its mind on the issue at an upcoming meeting at 6 p.m. Monday at Kingman High School, 4182 Bank St.