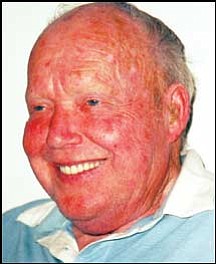 Darwin Burtis Brenbarger, 72, of Kingman passed away peacefully in his home on Sunday, Jan. 4, 2009, after a long illness.

Born July 2, 1936, Dar lived most of his life in Belvidere, Ill. He worked as a sheet metallist, a machinist, and hobbied as a farmer until 1992. He followed his dream of becoming a successful small business owner when he and his wife of 42 years, Mardel, moved to Kingman and made it a reality.

Dar, along with his wife and daughters, built and operated Dar's Dari Ripple. He loved the mom-and-pop atmosphere of the business and deeply enjoyed conversation with the friends he made and the patrons he served.

After 13 successful years of operation, the establishment was sold due to his ill health.

A memorial in celebration of his life will be at 2 p.m. on Saturday, Jan. 10, at Sutton Memorial Funeral Home, 1701 Sycamore Ave. Private interment will be held at a later date in Belvidere.

Darwin worked hard and enjoyed the life he shared with us all. He was a loving husband and a caring father and will be deeply missed by all who knew him.