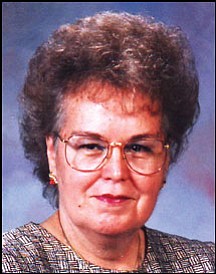 Mary Ella Robinson went to be with her Lord and Savior on Jan. 20, 2009. Mary had a long fight with heart problems. She will be greatly missed by her family and friends.

She is survived by her three daughters, all of Kingman, Christy Robinson, Linda Bigler and Loretta Mayo; eight grandchildren; and eight great-grandchildren. She is also survived by her three brothers, James White (Ginger) of Kingman, and Bill White (Bea) and Thomas White (Rosemarie), both of Phoenix. Her sister, Syble Loy of Wellsburg, W.Va., passed on Jan. 21, 2009.

Mary was born in Wellsburg to Thomas White and Florence Opal Midcap. She moved to Arizona with her three daughters in 1965 to provide them a better life, living in Phoenix until moving to Kingman in 2004.

The family would like to thank Doctors Bokhari and M. Iqbal and staff, along with KRMC Hospice for the great care she was given.

Services will be at 2 p.m. Saturday, Jan. 31, at Trinity Episcopal/Anglican Church, 425 East Spring.