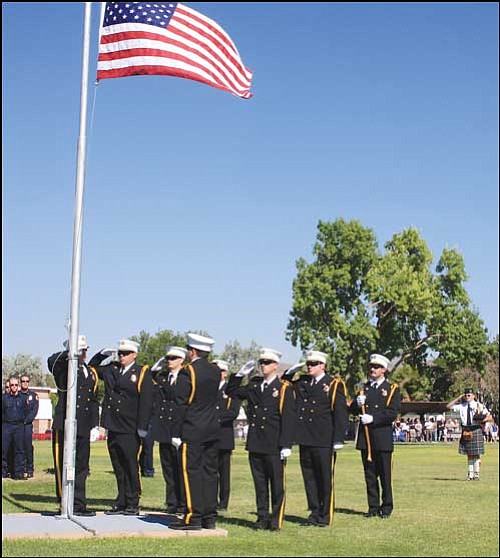 The Kingman Fire Department held a flag ceremony Sunday morning at Firefighters Park in honor of their 11 fallen brothers killed in a BLEVE explosion in Kingman on July 5, 1973. Helen Black Tapp unveiled a painting she made soon after the explosion which expresses her grief at the event and gratitude towards Kingman's firefighters, who she said had saved her life in 1952. The painting was donated to the KFD. Kingman Mayor John Salem spoke at the event, as did members of the KFD.

Left: The KFD Honor Guard raises a flag half-mast in honor of the fallen firefighters.

Below: Helen Black Tapp stands by the painting she created years ago and donated to the KFD Sunday. Members of the KFD Honor Guard and Asst. Chief Joe Dorner stand with her, as do (standing behind painting, left to right) Bob and Chuck Casson and Porter Williams, children of men killed that day.