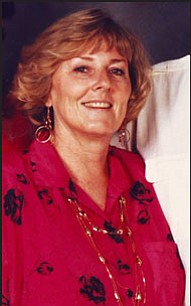 JoAnne Duncan passed away Friday, April 24, 2009, at Desert Highlands Care Center in Kingman after a courageous battle with cancer.

She is also survived by her daughter, Charlene M. Leighton and son-in-law Bill Weber; sons, Darryl J. Kell and Stephen D. Kell; eight grandchildren, all of California; plus several nieces, nephews and their families.

She was preceded in death by her father, Charles H. Duncan Sr.

JoAnne was an active member of the Mohave Livestock Association, Farm Bureau, and had many close friends in the state government. She also enjoyed the company of many of her friends and neighbors out at the "ranch."

JoAnne's wishes are being honored as she wanted to be cremated and not have any formal services. Cremation is being handled by Sutton Memorial Funeral Home. There will be a memorial service at a later date at her home, where she will be remembered with the fondest of memories by those who wish to attend.

In lieu of flowers, donations can be sent to the American Cancer Society, Kingman Chapter.