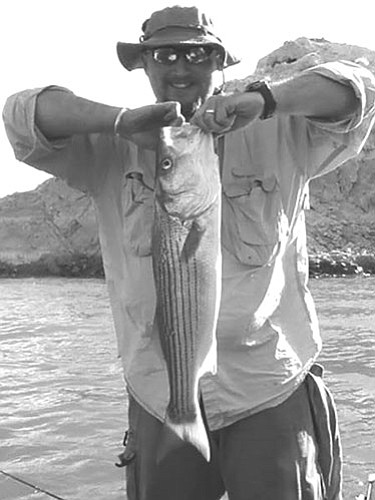 Courtesy<br><Br> Johnnie Hoeft holds a big striper he caught during the United Professional Fire Fighter’s of Kingman tournament on Saturday at South Cove. The fish weighed 5.7 pounds and was the largest taken during the tournament.

KINGMAN - Despite some tumultuous weather on Lake Mead, most of the 24 teams that were entered in the annual United Professional Fire Fighter's of Kingman Fishing Tournament last weekend had a good time and caught lots of fish.

The team of Ken Miller, Carlos Rooks and Chuck Rooks brought in a 40-fish limit of striped bass that weighed 60.55 pounds, narrowly edging out the team of Mark Olivas, Bobby Olivas Jr. and Mikey Olivas, who checked in 60.50 pounds of stripers.

Third place was garnered by Dan Winder and Robert Borker, who had a 40-fish limit that weighed 58.55 pounds.

The team of Robert Wise, Wally Mueller and his son Frankie easily won the largemouth division. The team checked in 15 largemouth that weighed 28.25 pounds.

Wise also caught the tournament's heaviest largemouth bass, a lunker that pushed the scales to 5.25 pounds.

Second place went to the team of Bob Olivas, Tim Grissom and Rick Olivas, who had 15 bass that weighed 25.75 pounds. Rick Olivas had the second largest bass of the tournament, a lunker that tipped the scales at 4.9 pounds.

Third place was won by Ed Walker, Ariel Walker and Ethan Esquibel. That team checked in 15 bass that weighed 23.4 pounds.

After the tournament, participants were invited to an all you could eat hamburger/hotdog lunch at the Meadview Civic Center, courtesy of the tournament organizers.

The next overnight fishing tournament for Kingman anglers will be Stripe-R-Rama. That event is scheduled for June 27-28 at South Cove.