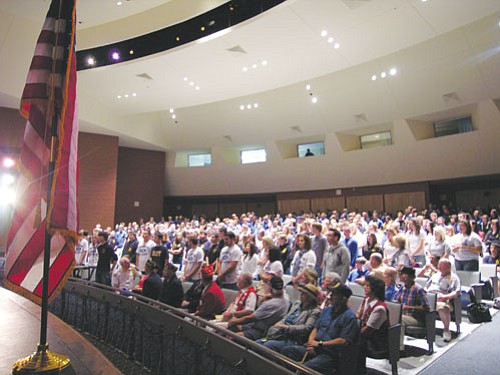 JAMES CHILTON/Miner<BR><BR> Almost all the Kingman High School students in attendance at the school's Tuesday Veterans Day tribute ended up standing when Principal Pat Mickelson asked for anyone who has a veteran in their family to do so. <BR><a href="Formlayout.asp?formcall=userform&form=20"target="_blank">Click here to purchase this photo</a>

KINGMAN - It was a solemn scene in the Kingman High School auditorium Tuesday morning as Principal Pat Mickelson introduced the school's 13th Annual Veterans Day tribute assembly with a sober acknowledgement of last week's shootings at Ft. Hood, just outside of Killeen, Texas.

"As a daughter of a career Air Force pilot and the wife of a Marine pilot, I have lived on or near many different bases in my life," Mickelson said, speaking before an audience of several dozen local veterans and many more KHS juniors.

"I always felt safe and protected when I would go on the base and see the flag flying overhead."

Mickelson went on to honor the service of the 13 people who were killed, presumably by sole suspect Maj. Nidal Hasan, whom she called "a terrorist disguised as an Army officer." Mickelson also offered her gratitude to Sgt. Kimberly Munley, the civilian Department of Defense policewoman, who stopped Hasan's rampage by shooting him four times, despite having taken a bullet herself. "I think it's important that we recognize, sometimes, the price of service," she said.

VFW Post 3516 performed the presentation of Colors as the tribute opened, with several students from the high school's "Little School" day-care program leading the crowd in reciting the Pledge of Allegiance.

By the time Mickelson was done, nearly every person in the room was out of their seat. "I think you begin to realize the commitments, and why we come together on Veterans Day to honor those who have served," she said. "Thank you."

Several KHS students took the stage to recognize the troops in their own ways. Lola Cude and Shaila Schmidt put on a skit based on Cude's own conversations with a Vietnam veteran who buys coffee at the McDonald's where she works. Another student, Ashby Morey, read a poem about the value of listening to veterans' stories.

Social studies teacher Dave Kopecky read another poem by student Charmaine Knell: "Standing on the front line/glory in their eyes/a gun in their hands/family on their minds/the sacrifice they've given/nobody will ever know/they put their lives on the line/each and every day/for the land of the free/and the home of the brave/to stand up for our country."

Following the reading, Kopecky gave a brief history of the bugle call "Taps," which originated during the Civil War in 1862 before coming into regular use as a marker for military funerals, flag ceremonies and as the indication for "lights out." KHS band student Keith Blake then closed the assembly with that very song, its somber notes echoing through the chamber as civilians covered their hearts and veterans saluted briskly.

"It is in these times that we need to draw inspiration from our veterans, who although they were afraid, stepped forward to do what was asked of them," Kopecky said. "So today, we honor our veterans. And let us honor them, not only with our words and with our applause, but with our actions."