Sportsmen wonder how far Fed will go with condors 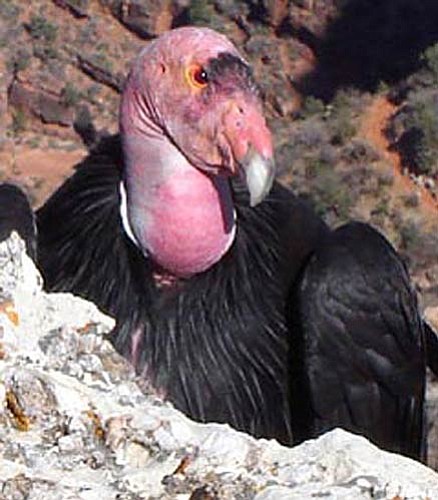 Courtesy<BR><BR> The California condor won't win any beauty contests, but hunters are keeping a close eye on the endangered bird.

They have the largest wingspan of any bird in North America, but these red-headed birds will never win any beauty contests.

They are the California condors, and they are one interesting bird. Fossilized remains of the big birds have been found in caves in the Grand Canyon, so they have been in Arizona for many, many years. The last known condor sighting in Arizona prior to 1996 was in 1924.

Currently, Arizona has a thriving population of these giant carrion-eating birds, whose wingspan often reaches up to 9-1/2 feet wide. They typically weigh from 16 to 26 pounds.

Their lifespan is not really known, but they are believed to be able to live up to 60 years in the wild.

A number of them, maybe 60 or more, live in the Vermillion Cliffs, which are located on the south end of the Paria Plateau in northern Arizona near Page.

The birds' presence in Arizona was a result of a transplant of birds from California, where the last surviving birds were living. Their numbers had dipped to a low of 22 birds, so it was decided to capture all of the wild birds in California and start a captive breeding program. It was from this program that Arizona got its birds. These birds are from the family of New World Vultures, and are currently federally protected under the Endangered Species Act.

However, the birds currently in Arizona have a special designation from the U.S. Fish and Wildlife Service as a 10j population, which means they are an experimental, non-essential population.

In recent years, several groups have attempted to have these birds receive the full protection allowed under ESA, which could potentially negatively affect hunters and livestock producers in northern Arizona.

One of the major problems with condors is that, as carrion feeders, they scavenge deer and elk carcasses that hunters have shot. Some say that the bullet fragments in these carcasses cause lead poisoning and pose a serious threat to the condors.

In 1996, in an attempt to reduce the number of condors that had ingested lead, Game and Fish started giving hunters with deer tags in Units 12A East and West, 13A and 13B, vouchers that allowed them to receive two free boxes of lead-free ammo.

The program has enjoyed a lot of success, with up to 90 percent of the hunters using lead-free ammo. But now the question remains, what if the department cuts off the free ammo? Will hunters still use the lead-free, mostly copper bullets to hunt with?

The answer to that question is not known, and while most sportsmen don't object to using copper bullets, the cost of this ammo is high, with a box of 20 rounds costing upwards of $100 for some special magnum calibers.

While it is known that copper is also toxic to condors, non-lead proponents point out that the odds of a condor ingesting a solid copper bullet is much less than it is for ingesting lead fragments from a hunter's traditional lead bullet.

Only time will tell how this controversy will be dealt with. There have not been any reported deaths of condors associated with ingesting lead for several years. And while there is no doubt we all would like to see the condors make a full recovery, we must never forget that the Arizona population was designated as an experimental and non-essential population.

Now, some sportsmen and even some agencies are questioning that support. Will the federal government go back on its word in light of court actions by groups such as the Center for Biological Diversity, which is suing the Bureau of Land Management (Arizona Strip District) over the use of lead bullets on the Arizona Strip?

We'll see how it plays out.