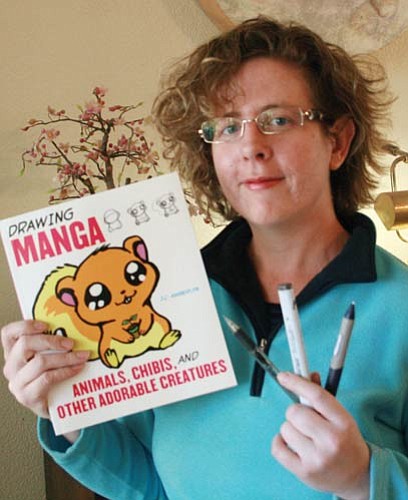 JC Amberlyn/MINER<BR><BR> JC Amberlyn at home Wednesday with some of her drawing tools and her new book, "Drawing Manga Animals, Chibis and Other Adorable Creatures", which is out in bookstores now.<BR><a href="Formlayout.asp?formcall=userform&form=20"target="_blank">Click here to purchase this photo</a>

KINGMAN - She was already an artist, hunter, naturalist and the Miner's award-winning photographer. And now, JC Amberlyn is also a two-time published author.

But unlike "Wildlife's" realistic depictions, "Drawing Manga" instructs artists on how to draw animals in the style of Japanese comics and animation, which have gained a large following in the Western world over the last decade.

Amberlyn is herself a long-time fan of the style, having first been exposed to it growing up in the mid-1980s in the San Francisco Bay area.

"There were a couple of stores there that had Japanese items in them, including a local comic bookstore, which is where I first saw anime- and manga-related magazines and comics," she said. "It really caught my attention - it was so different, yet it looked cool. I just started getting very interested."

Amberlyn began purchasing imported magazines describing the then-latest in Japanese comics and animation, pouring over the character designs despite being unable to read the writing.

"I loved all the pictures in them, and I'd sit there and copy them, try to learn how to draw in that style," she said.

It was a lonely hobby at first, but as the trickle of anime coming to America grew into a flood in the mid 1990s with the advent of popular television shows like "Sailor Moon," "Dragonball Z" and "Pokemon," Amberlyn started meeting more and more people who shared her appreciation for the art form.

"Back then, I'd say 'anime' and 'manga' and nobody would know what I was talking about, and now it's the new big thing," she said. "It just seems like mainstream America has finally caught up with my interests."

"Drawing Manga" is broken up into three sections. The first gives step-by-step instructions on drawing each of the individual components of an anime-style animal, with pages devoted to head shapes, facial features, two- and four-legged body structures, and anime's most distinctive feature: large, expressive eyes. The book's first section also details how to draw "chibi" animals, which are super-deformed, highly-disproportionate drawings designed to evoke a sense of overwhelming cuteness.

The book's third section shows the reader how to use various computer programs like Adobe Photoshop and Corel Painter to create their own full color manga-style comic pages and illustrations. "'Manga' is Japanese for 'comic,' so I wanted to get instructions for creating a comic page in there," Amberlyn said.

Throughout the process, the reader is guided by Space Chicken, Space Weasel and Lyra, a set of anime characters Amberlyn designed in 1998 for a video game project at the Art Institute of Phoenix. The cartoon trio went on to star in Amberlyn's own comic "Spiral," which was featured in an American manga anthology released by Radio Comics in the early 2000s.

"They're kind of the narrators of the book," Amberlyn said.

Amberlyn said the book is geared toward adolescent artists, though she noted the book should appeal to anyone with an interest in Japanese comics and a modicum of artistic talent. "It's really for anyone with an interest in learning more about drawing manga-style animals," she said. "It's targeted to teens and tweens, but I think there's something for anyone regardless of your skill level."

"Drawing Manga" retails for $21.95 and is available at most major book retailers, as well as online at www.amazon.com. In addition, Amberlyn will host a book signing from 11 a.m. to 2 p.m. Dec. 6 at the local Hastings, 3153 Stockton Hill Road. For more information, including samples of Amberlyn's art, visit www.jcamberlyn.com.