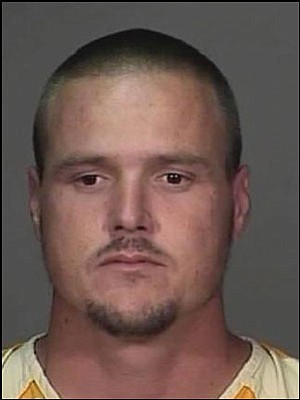 KINGMAN - An attempted murder suspect who was recently extradited from California is facing new felony charges for allegedly assaulting a detention officer at the Mohave County Jail.

He was extradited to Mohave County to face attempted first-degree murder and aggravated assault charges in connection with an attack on a 51-year-old Kingman man May 15.

The man was riding a bicycle in the 4100 block of Eagle Drive when Masters allegedly pushed him off the bike and stabbed him several times.

The man survived the attack, which he told police was sudden and unprovoked.

Masters was being held on a $100,000 bond in that case after being extradited to Kingman.

He faces new charges of aggravated assault after he allegedly kicked a detention officer who was escorting Masters back to his cell around 9:45 p.m. Saturday.

The detention officer had to use pepper spray to restrain the prisoner.

Masters was released from prison in September 2008 after serving 18 months for aggravated assault.

He faces up to 21 years in prison for the felony attempted murder charge.