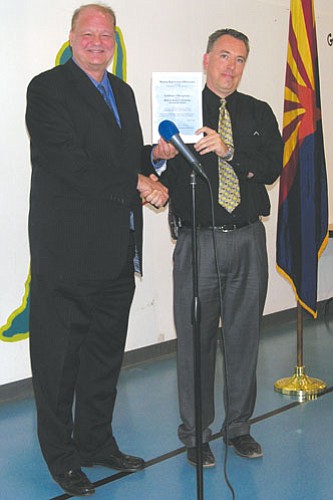 KINGMAN - State Superintendent of Schools Tom Horne paid a visit to several area school functions Tuesday to congratulate both local districts on their recent success at the Arizona Instrument to Measure Standards or AIMS tests.

Speaking before an assembly at Kingman Academy of Learning's Intermediate School, Horne presented principal Eric Lillis with a certificate of recognition for maintaining the school's Highly Performing Arizona Learns certification. He then turned to address the student assembly.

"I know I'm looking at the future leaders of the state of Arizona and of the country," Horne said. "You guys are great kids, and you know, one thing I've learned from serving seven years as the state superintendent of schools is that great kids have great teachers." Horne later appeared before the monthly meeting of the Kingman Unified School District, again congratulating the district for making wide gains on the AIMS test and Arizona Learns.

"The last time I appeared before you, I came to congratulate you for the excellence of your arts program," he said. "One of the things we say about arts programs is that kids who are immersed in arts do better academically."

"I think it's very fitting you've kind of proven it that I'm here now to congratulate you for your academic performance," Horne said.

The board unanimously voted to approve guaranteed maximum prices for a pair of district construction projects. The first was for the construction of a new elementary school to be located adjacent to the new White Cliffs Middle School currently under construction at Prospector Street and Airway Avenue.

The elementary school, which has yet to be named, would cost about $7.4 million for initial construction, which includes classrooms for up to 500 students with enough office, library and cafeteria infrastructure to support expansion for up to 750 students. According to the district's director of construction, Oz Enderby, construction on the new school could begin as early as next week, with much of the work provided by contractors who are already finishing up the White Cliffs project.

"It'll break ground here probably next week," Enderby said Wednesday. "The site work will begin immediately, and the schedule has the school being completed by July 2010, available for occupation in August 2010."

The board also approved a $300,000 addition to a $2.78 million improvement project it approved last month for the Kingman High School sports facilities. The addition will add about 1,800-seat capacity bleachers to the football field's home side, as well as a press box.

"When it's all said and done, both (Kingman and Lee Williams) high schools will have practice and game facilities for their field sports," Enderby said. "It'll all be completed by the first of May. All facilities will be ready for use in August of 2010 when school resumes."

Enderby said the construction is being paid for through money raised by a bond passed by voters in November 2006. He added that the last remaining large bond project will likely be the complete conversion of the current White Cliffs Middle School into the new Lee Williams High. Enderby said a funding proposal for that project will likely come before the board in January, after White Cliffs students relocate to the new facilities at Airway and Prospector.