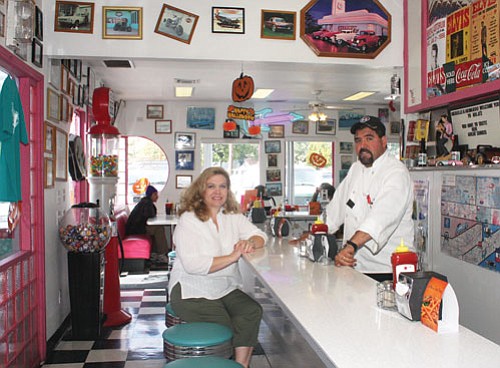 JC AMBERLYN/Miner<Br><BR> Michelle Jimenez and her husband Armando lease Mr. D'z Route 66 Diner from the Dunton family. The restaurant was recently rated as the No. 2 diner in the state by "Arizona Highways."<BR><a href="Formlayout.asp?formcall=userform&form=20"target="_blank">Click here to purchase this photo</a>

KINGMAN - Kingman residents may have a harder time finding a soda fountain stool or a booth at Mr. D'z Route 66 Diner. The bright pink and turquoise diner hopped into the No. 2 spot in November's Arizona Highways' top 12 list of diners and drive-ins in the state. It even beat out Seligman's Snow Cap Drive-In, which pulled in at No.5.

"We're really happy to be in Kingman and extra happy to be named in the magazine," said Michelle Jimenez, who leases the classy diner with her husband Armando from the Dunton family.

The diner's black and white checkerboard floor is no stranger to fame, however.

In May 2006, TV talk show host Oprah Winfrey stopped for a bite and a mug of the diner's famous frosty root beer. Winfrey and her friend Gayle King were out to see the USA in a Chevrolet along historic Route 66, and Winfrey liked the sweet concoction so much that the Jimenezes donated 17 cases to her studios in Chicago.

The diner is a local haven for classic car and motorcycle enthusiasts as well as TV crews. An episode of The Learning Channel's "Biker Build Off" was filmed at the diner. It has also appeared on travel shows in Ireland, Japan and in international magazines and newspapers.

The diner was originally the Kingman Café in the 1930s and then became the Kimo Shell Station, according to Scott Dunton.

His family bought the place several years ago when it was still the Kimo Shell Station, gutted most of it and rebuilt it into the diner that customers see today. The front room, where Oprah and her staff had lunch, was the spot where the gas pumps once stood. Dunton owned and operated the diner for several years before leasing it in 2000.

Armando was working as chef at the MGM Grand in Las Vegas when he decided he had had enough of big corporate restaurants. The two heard from family and friends that the diner was up for lease. They drove out, liked the place and have been here ever since.

The original menu, including the chicken fried steak and the Harley dog, was based off of Dunton family recipes. Dunton even created the famous root beer. The idea came from when he visited a fair as a child and tasted a sweet, creamy root beer. In 1993, he tried to recreate that creamy taste. After several taste tests by the family, they settled on one concoction and contracted with a company to manufacture the syrup that is used in the diner today.

Michelle attributes the diner's international fame to her husband's great cooking and the friendly staff. "He puts a lot of work into the restaurant and getting top quality food," she said. The handpicked staff are "always friendly and just great people to work with."