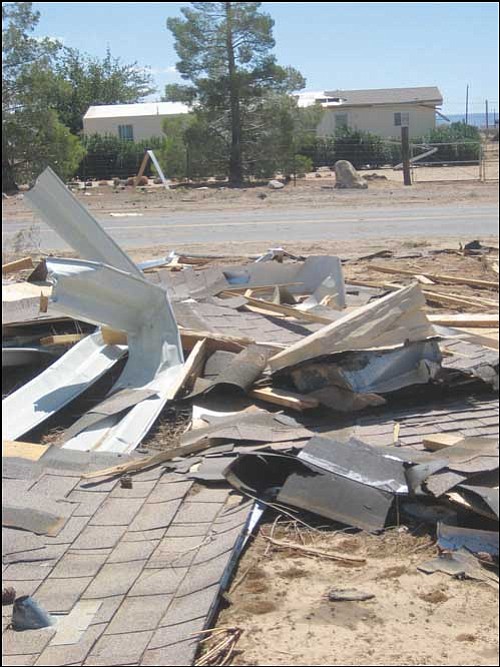 ERIN TAYLOR/Miner The roof of this Golden Valley home ended up across the street after a powerful storm struck Friday night.

GOLDEN VALLEY - Linda Pedersen was asleep Friday night when she heard what sounded to her like a freight train bearing down on her home.

Pedersen's Golden Valley mobile home off of Verde Road appears to have bore the brunt of a brief but powerful storm that moved through the valley around 11 p.m. Friday. According to residents, the storm lasted just five to 10 minutes.

"It was here and it was gone," Pedersen said.

Almost all of Pedersen's roof was ripped off the home, along with a back porch veranda that ended up in the front yard. The tops of two tall trees were broken off as well.

The damage to Pedersen's home is in stark contrast to the homes around it, which experienced little to no damage. Pedersen said some of her neighbors lost shingles from their roofs and one neighbor's carport appeared to suffer moderate damage. Caked mud also covered parts of the surrounding roads where the washes run through.

Pedersen expects the damages to her home to be covered by insurance.

For many in Golden Valley, the damage appeared to be hit and miss. Over on Norman Flat Road, Vaun Hunt lost two large storage sheds after they were picked up by the wind and blown into a neighboring orchard. One of the sheds landed in an apricot tree, destroying the tree.

Hunt said he was down in his basement when the storm hit and described the same rumbling noises as Pedersen. Hunt had his windows open before he realized the storm had moved in and ended up mopping up several gallons of water off the floor.

Hunt said the two 10-foot by 10-foot sheds were destroyed while a third storage shed was not.

"It is going to take a while to clean up," Hunt said.

PHoto: Picking Up The Pieces
Kingman residents clean up after storm
Thank You: For help when it was needed
Storm ravages Fort Mohave RV park
Family picks up pieces after storm