Family picks up pieces after storm 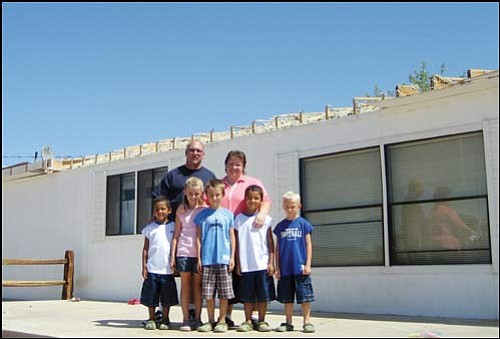 SUZANNE ADAMS/ Miner<br> The Jenkins family stands in front of their former home. The Sept. 4 storm ripped the roof off the building, causing a propane leak that trapped the family inside the home until Pete Jenkins could kick open the front door.

KINGMAN - All Angel Jenkins wants for his birthday is a new house.

Jenkins, brothers Ace, Andrew and Zack, sister Haley, parents Pete and Kathy and their five mastiffs are living at grandmother Louise's house after the Sept. 4 storm ripped the roof off their home, tore apart their playhouse and smashed their garage.

"We lived in Kansas for a few years, near Greensville. We saw tornadoes pass by out there, but we've never had anything like this," Pete Jenkins said.

The Sept. 4 storm tore through the Golden Valley area around 11 p.m. and took the 48-foot patio and most of the roof off the front of the house the Jenkins were renting.

"We had just gone to bed. It sounded like a freight train," said Kathy.

The wind flipped the shredded roofing and patio over the top of the house, smacking it into the propane tank that caused a gas leak and prevented the family from leaving out the back door. When the family tried to escape out the front door, they found it blocked with debris from the storm. Pete Jenkins had to kick the door open.

The family evacuated to their car until the Golden Valley Fire Department arrived to take care of the gas leak. The family spent the rest of the night huddled on the couch in the center of the home until the Red Cross arrived the next morning.

The houses closest to the Jenkins suffered no damage at all from the storm.

The storm also picked up and shredded the kids' playhouse that Pete had just finished and they had just stocked with all their toys.

"They were out here the next morning with a garbage bag looking for their toys," Kathy said.

Most of them were gone, along with the kid's swing set, which sits tangled up with part of the fencing in one corner of the yard. Their trampoline is barely visible among the desert brush more than 200 yards away.

The Jenkins aren't sure how one of their mastiffs managed to survive after its kennel, a large metal shed, was crumpled by the storm. The wind also tore out the side and roof of the detached garage next to the kennel and scattered the debris for several yards behind the property.

The family lost most of its possessions to either the wind or the rain that night. Pete and Kathy guessed they had a total loss of about $30,000 to $40,000, but they're still trying to figure out what they lost to the wind and what was damaged and needs to be replaced. They're now looking for a new home.

"We're just glad everyone got out all right," Kathy and Pete said.