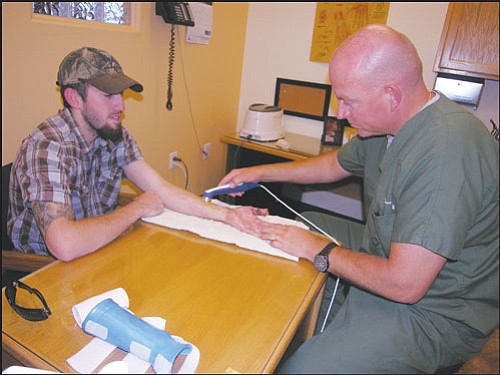 JAMES CHILTON/Miner Councilman Kerry Deering performs ultrasound therapy on mechanic Brent Mason Thursday morning in the offices of Deering Therapy Services, 2501 Stockton Hill Road. Deering has said he will not seek a second term on the City Council, citing a desire to focus more on his family and professional life. <b><a href="Formlayout.asp?formcall=userform&form=20"target="_blank">Click here to purchase this image as a print or photo gift</a></b>

KINGMAN - City Councilman Kerry Deering has confirmed he will not seek re-election next spring.

Deering explained his decision shortly before the Council work session Monday evening, describing his desire to spend more time with his children and at his physical therapy business.

"I've never been a politician. I've never really sugarcoated things like a true politician would," Deering said. "Unfortunately, it's affected my family life - in some aspects my business - and so I figured that I only have a few more years with my kids at home, I figure now's the time to be a good dad, be a good father, husband."

Deering said he was pleased to hear that his Council colleagues Janet Watson and Ray Lyons were both considering running again. In the past, Deering has emphasized the importance of having experienced members on Council to help mentor those new to the body.

And while Mayor John Salem, Robin Gordon, Keith Walker and Carole Young can no longer be considered "newbies" to the Council, Deering said he was glad there would still be some old blood on board to help lend a sense of history to the decision-making process.

"I had the benefit, when I got on this Council, to have people that had been in for years that understood," Deering said. "Because it's a lot different, your perception of what you can do and, when you actually get into office, what you can do." Reflecting on the current administration, Deering said he felt Salem had been "lucky," coming in at a time when the city budget was already balanced before the worst of the recession hit. Deering added that the past 18 months had been mostly free of major conflicts, unlike his first two tumultuous years in office, which saw the sacking of City Manager Paul Beecher, the rejection of a major bond election, conflict over the Kingman Crossing and Rattlesnake Wash interchange projects and a host of other issues, all underscored by a general loss of trust in municipal government.

"I think there hasn't been anything going the last year and a half, and so, I think John's been very lucky there hasn't been a lot of turmoil, and we haven't had any money to spend on capital improvements or do any projects," Deering said.

"I mean, it was a tough two years," Deering concluded.

Asked if he had any regrets, Deering pointed to the city's failure to secure the Kingman Crossing interchange prior to the start of the recession and a subsequent lawsuit between the city of Phoenix and the Goldwater Institute that has indefinitely stalled sales tax incentive agreements like the one proposed between Kingman and Vestar Development.

"I see when we could've possibly gotten Kingman Crossing run through," Deering said. "I wish that we'd had that now, seeing the (Hualapai Mountain Medical Center) hospital and the new (White Cliffs Middle) school over there, I think it was a big mistake not going through with that."

Deering said he felt Beecher's ouster and the ensuing loss of public trust had ruined the project's chances, and had Beecher not come up as an issue, Deering said he believed Kingman Crossing might very well be under development today - though he also placed some of the blame on landowners in the vicinity of the Rattlesnake Wash interchange project.

"They felt it was going to be competition," he said. "I felt that they did everything they could to make sure that (Kingman Crossing) was sabotaged."

While he plans to focus mainly on his business and his family once his term ends next June, Deering did not rule out the possibility of returning to politics after his two children head off to college.

"You know, maybe down the road if it ever hits me again, I'll come back into civil service," he said.

"But at this point, I'm glad that Ray and Janet are both considering running, and I feel like with the current Council that'll still be in there, and at least with either Ray or Janet (winning re-election), I feel that then the Council can move into a positive direction."