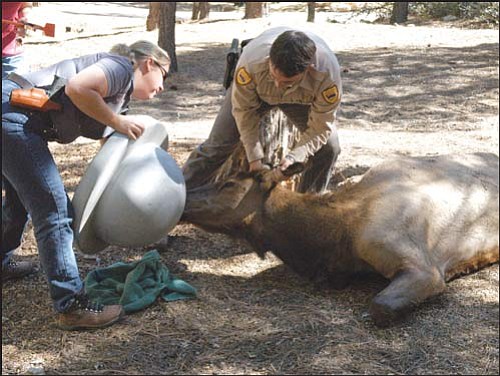 Arizona Game and Fish Department/ Courtesy<br> Virginia Gouldsbury and Tyler Richins, both Game and Fish wildlife managers, remove a garbage lid from an elk's neck in the Hualapai Mountains a few years ago.

KINGMAN - The local office of the Arizona Game and Fish Department is pleading with residents of the Hualapai Mountains to stop feeding the deer and elk populations, lest they find themselves feeding a hungry mountain lion as well.

It's been a frequent refrain from Game and Fish officials, but it's no less urgent now than in years past. In a recent news release, Zen Mocarski, the department's local information and education manager, warned that a mountain lion recently killed an elk between two houses in the Pine Lake community of the Hualapais. Despite being a species normally active during twilight hours, the mountain lion was later spotted walking through a neighborhood in broad daylight, according to one sportsman's report.

"I'm concerned," Mocarski said. "These types of situations can escalate quickly. Feeding issues in this area have created a smorgasbord for this lion, and potentially other predators."

Officer Lainie Antolik is a wildlife manager for Game and Fish who is active in the Hualapai area. She said many of the elk she's seen have lost their natural instinct to forage due to the easy availability of human food. Some people have even set up feeding troughs in their front yards to attract elk, deer and even javelina.

"Some of the neighbors have named these animals and call them by name," Antolik said. "We understand people love to watch wildlife, but we want them to watch them in the wild. We don't want them to bring them into their communities by feeding them and creating watchable wildlife that way."

While it's rare for mountain lions to attack humans, Antolik said that's mainly because the lions aren't used to humans and typically run away from them. With so much free prey in the area now, however, she said it's possible for a stray mountain lion to stick around long enough to lose its natural fear of humans.

"They come into the community, they've got deer and elk everywhere they can feed on, they see humans, and they'll start getting used to them," Antolik said. "Once they get used to them, they don't get bothered by them anymore and they tend to stay in the area."

Antolik noted that once mountain lions make a kill, they will typically cover it with leaves and come back to feed off it for several days. If the kills are hidden in an area where humans live, however, an unsuspecting person may attract the lion's attention by wandering too close.

"Someone may be walking by that prey item and not know it, and then they'll be between the lion and its prey, unknowingly," Antolik said.

According to Mocarski, Game and Fish had to kill two mountain lions in the late 1990s after the lions began preying on local pets in addition to their usual quarry. If those residents don't want the same thing to happen this time, he said, they should stop feeding now, rather than later - and remember who's ultimately responsible if the lion does become a public safety threat.

"When a problem escalates, those who fed the animals won't accept the responsibility for when these elk, deer or household pets become victims to a predator," Mocarski said. "If (the current) lion becomes a public safety threat and is killed, those feeding will turn a blind eye and blame Game and Fish."

Aside from mountain lions, however, Antolik noted that the elk and deer themselves are still wild animals, no matter how used they are to eating out of people's hands, and they too can pose a threat to the humans who feed them. The opposite is true as well, since many human foods lack the nutrition that elk and deer get from their typical diet of grasses, flowering plants and tree sprouts. Once they get used to eating human food, Antolik said, many of them stop their natural foraging habits in favor of raiding local garbage cans.

"If you see the elk and deer in the communities, they're not very healthy looking," Antolik said. "We've had three incidences over the last several years where we've had elk with trash can lids stuck around their necks. Elk should not be foraging through trash cans."

Antolik said she and Mocarski will attend a homeowner's association meeting to discuss the problem further at 5:30 p.m. Dec. 12 in the Kingman Fire Station No. 2 at 1605 Harrison St. Based on past results, however, Antolik was already skeptical that the meeting would actually change anyone's behavior.

"The people that tend to show up to these meetings are the ones who agree with us and want to see something done," she said.

For more information or to report mountain lion activity, call Game and Fish at (928) 692-7700 and press 0 for the front office.