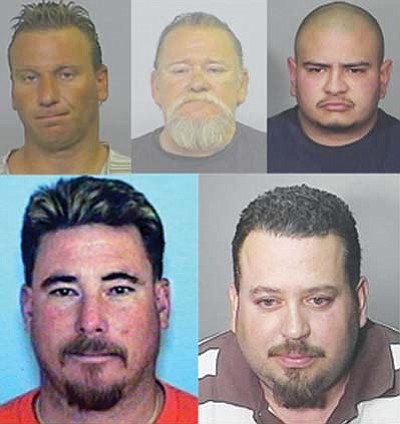 KINGMAN - A month-long trial ended Friday with the jury finding the remaining five defendants in the Operation Picture Perfect methamphetamine ring guilty of 16 of 20 counts.

Sean Blackwell, 40, John Boone, 55, Michael Mayo, 30, Daniel Milea, 40, and his brother, Xavier Milea, 37, were the last remaining suspects out of an original 18 who were arrested in April 2008 after a lengthy investigation by the Mohave Area General Narcotics Enforcement Team.

Boone, Daniel Milea and Mayo were found guilty of conspiracy to sell dangerous drugs, illegal use of a wire and conducting an illegal enterprise.

While Blackwell is eligible for probation, it is likely all five men will be looking at multiple years in prison when sentenced by Mohave Superior Court Judge Steven Conn in the next month.

Prosecutor Greg McPhillips said he spent months preparing for the case that involved tens of thousands of pages of information, including wiretapped conversations between those involved in the methamphetamine ring said to have brought around 500 pounds of the drug into Kingman over the course of a year.

McPhillips said he observed jurors taking furious notes during the trial. He said the fact that they acquitted the defendants of some of the charges showed that they worked hard to understand the evidence presented.

"I think this jury took a lot of notes and had definite ideas about each defendant's role in the conspiracy," McPhillips said. "Their verdicts were tailored to their understanding of the evidence on each defendant."

Blackwell, Mayo and Xavier Milea were taken into custody after the verdicts were delivered. Boone was not present, although his lawyer said that was a result of miscommunication as to whether the jury was going home for the weekend.

Daniel Milea stopped attending the trial after the state wrapped up its case two weeks in. He sent a letter via a family member in support of his younger brother. His whereabouts are currently unknown. Warrants have been ordered for both Boone and Milea.