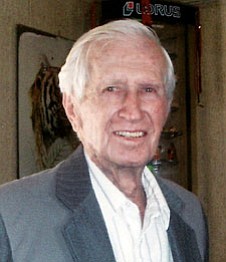 Cecil was a World War II Navy veteran and worked hard all his life and raised a family.

Cecil was preceded in death by both parents, his wife of 59 years, Helen, brothers Charles Houghton and Bus Thompson, and his sister June Parker. He is survived by his son, James Houghton, and daughter Linda Morton, both of Kingman. He also had eight grandchildren, 18 great-grandchildren and eight great-great grandchildren.

Cecil will be forever missed by those who knew him.

Graveside services will be Tuesday, Dec. 7, at Mountain View Cemetery.

Special thanks to Dr. Mahmood, the Hospice House and Kingman Regional Medical Center and their staff for all their love and care.