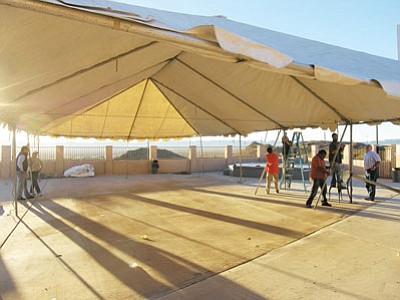 JAMES CHILTON/Miner<br /><br /><!-- 1upcrlf2 -->Castle Rock Bar & Grill owner Peter Cimino (left) stands with Julia O’Connell of Party Perfect as they observe O’Connell’s crew putting up a tent for an event at the grill later this month. Cimino is hoping to turn Castle Rock into an event center for Golden Valley, featuring various entertainment acts and family-oriented events like karaoke contests and dancing.

GOLDEN VALLEY - The Castle Rock Bar & Grill on U.S. Highway 93 in Golden Valley created quite a stir last month when rapper Flavor Flav headlined a concert there. But according to bar owner Peter Cimino, Flav was just the beginning of what he hopes will become a successful events center in an area that is starving for more entertainment options.

Since he purchased the Castle Rock Bar & Grill in May 2005, Peter Cimino had dreamed of turning the bar into a place where families from around the valley could bring their kids to see various acts, from country-western stars to rock musicians to magicians and acrobats. Unfortunately, the flagging economy prevented Cimino from realizing that dream early on, and until recently, the bar's outdoor arena was used mainly for steer roping which, while not without its charms, was a far cry from the variety of entertainment acts he had been hoping to host.

"They compete and have prizes, but that's all we've been doing for some time," Cimino said.

Now, with the opening of the Hoover Dam bypass bridge, that's all set to change. Cimino has rebranded his arena the Castle Rock Events Center, and he is now in contact with various musicians and other performers in Las Vegas and locally, whom he hopes to bring in on a regular schedule.

He has already lined up several acts for this month and hopes to continue adding acts to the roster as time goes on.

"Going into December, we're starting now with some small acts," he said. "We've got a magic show with acrobatics, sort of like Cirque du Soleil. Then we've got T-Bone Willie Hays, he's the founder of Center Stage Karaoke in Boise, Idaho."

The magic acrobats, "Yoshi and Gamba," are set to debut at 7:30 p.m. on Dec. 20, while Hays will host a karaoke contest this coming Saturday at 7 p.m. Every Sunday this month, Cimino says he plans to host family dancing and karaoke from 3 to 8 p.m., with standard karaoke on Tuesday nights.

The weekend of the 17th and 18th will see country fiddler Clay Mac, who will play two shows those days.

The arena has also attracted the eyes of local Roller Derby club Route 66 Derby Chix, who have expressed interest in using the arena as a skating venue.

In addition to the events he's lining up, Cimino said he's opened Castle Rock to additional family events including group dinners and receptions, wedding parties and car shows. By this time next year, he also hopes to include attractions such as hayrides, Shetland ponies and even a local replica of the popular Gift of Lights holiday drive-through attraction in Las Vegas.

"I'll admit, it's very scary to do all this at a time like this, but I feel no time is better than the present to try to get some positive energy into the valley," Cimino said.

"My neighbors here are really awesome, and they want to see this place succeed."

The Castle Rock Bar & Grill/Event Center is located at 3743 U.S. 93 just outside of Kingman.