In Memory of: Edgar Allen Slaughter 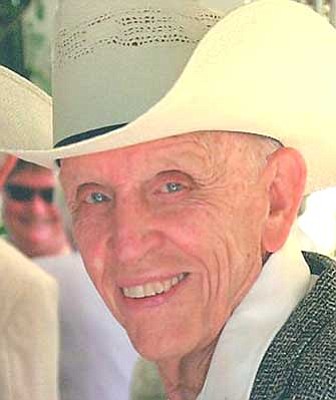 Edgar Allen Slaughter, age 95, passed away on Tuesday, Dec. 14, 2010, in Hemet, Calif. He was born in Fort Thomas, Ariz., on Aug. 31, 1914. The family was ranching on the Big Sandy in Arizona at the time of Edgar's birth. His parents, William and Elnora Slaughter, had eight children who lived to adulthood. Though he was born third from the youngest child, he survived all of his brothers and sisters by almost a decade.

Edgar served in the U.S. Army Air Force in 1945-1946. He was a member of the occupation forces. When he arrived in Japan, he toured a still-smoldering Hiroshima.

After the war, he attended electrical school in Chicago. He was employed by Fitzgerald Electric Company in Las Vegas as a master electrician for more than 30 years. He worked on the electrical installation for some of the iconic downtown Las Vegas casinos, such as the Frontier and Silver Slipper.

He moved back to Kingman in 1985 to be near his sister, Clover Odle, and brother, Hap (Jesse James) Slaughter, now both deceased. He is survived by his daughter, Claudia Sue Meek of Hemet and San Marcos, Calif., and his son, Mark Allen Slaughter of Nashville, Tenn. He is also survived by four grandchildren, Travis Meek, Reina Meek, Brandon Slaughter and Elijah Slaughter; two little great-granddaughters, Cora Helene Meek and Claudia Rose DeLucien; and a new great-grandson, Dylan James Meek.

As a young man, Edgar enjoyed horseback riding, hunting and fishing with his large family of brothers and nephews, and with his wife's family, the Griggs of Hackberry. In later years, he looked forward to visits and calls from nieces and nephews, family, friends, and his little granddaughters. He enjoyed an active social life until the last months of his life, and was still driving at age 93.

Memorial services will be held at 1:30 p.m. on Monday, Dec. 20, at Sutton Memorial Funeral Home, 1701 Sycamore Ave. Donations in lieu of flowers can be made to Hemet Hospice Volunteers, Inc., 890 West Stetson Avenue, Suite B, Hemet, CA 92543, or online at hemethospice.org.

Ed Slaughter will be greatly missed. His death represents the passing of an entire generation and way of country life, which was lived near to the earth, with the needs of family always placed before oneself.