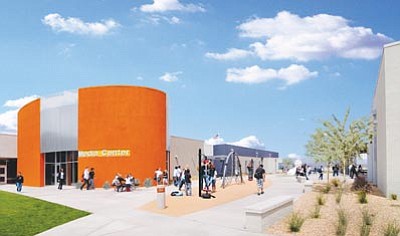 KINGMAN - White Cliffs Middle School only opened this year, but it has already received awards, both for its architectural design and its efficient construction.

Earlier this month Scott Shively, a principal at DLR Group, the firm that designed the school, presented the Kingman Unified School District governing board with the American Institute of Architects Western Mountain Region Award of Merit as well as the Southwest Contractor/McGraw Hill award for the Best K-12 School Project in Arizona for 2010. According to DLR spokeswoman Marsha Crockett, each award was selected by a panel of experts in the field of education, design and construction.

KUSD Construction Director Oz Enderby said the awards were the first of their kind the district has ever received. He added that judges seemed to be particularly impressed by the project's low cost when compared to its esoteric yet effective design.

"I think what put it over the top was the design as well as that it came in a million dollars under the original budget," Enderby said. "That's one of the things that caught the judge's attention, that it was such a state-of-the-art school, yet significantly under budget."

White Cliffs was originally projected to cost about $20 million to design and construct, though that figure was later revised downward to $19 million. In the end, however, the final bids from DLR and CORE Construction Services totaled just $18,195,000.

Enderby said judges also commented on the school's unusual design as a nod to Kingman's automotive past as the heart of Route 66, employing large amounts of shiny metal, bright colors and organic curves. He added that the inclusion of climbable outdoor structures surrounded by a soft, rubbery walking surface also contributed to the judges' opinion that the design choices actually made the school more fun for the students, in turn keeping them more invested in their education.

"Some of the other things they commented on were the use of natural lighting and some of the efficiencies that were integrated into the building," Enderby said. "I think the awards really recognize the district as building schools that are state of the art and progressive, yet still a fun environment and tying the old with the new."

White Cliffs is one of a slew of new construction projects the district has undertaken since the passage of an $80 million bond issue in November 2006. Other recent construction projects have included a central services campus with a kitchen and vehicle maintenance facilities, expanded athletic facilities at Kingman High School and the new Desert Willow Elementary School, located just north of White Cliffs and sharing many of its aesthetic themes.

The district is currently in the middle of its last major bond construction project, repurposing the old White Cliffs campus downtown into the new Lee Williams High School. However, with district enrollment unexpectedly falling after the bond's passage, it remains unclear whether either Desert Willow or Lee Williams will open as anticipated or will remain unused while the district braces for further spending cuts from the state legislature.

According to District Superintendent Roger Jacks, the governing board has until early spring to make that decision, and board members will likely hold a major workshop on the issue some time in late January.