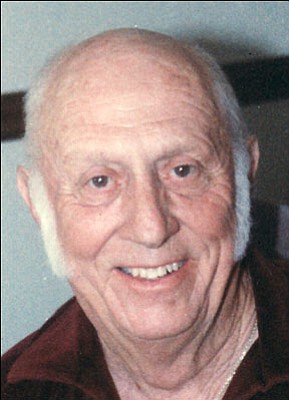 Hank served in the U.S. Army Air Corps, sneaking in at age 16, one of the few WWII veterans left in Kingman. He was a member of St. Mary's Roman Catholic Church, Fourth Degree Knight of Knights of Columbus, and St. Vincent de Paul Society. Hank was prominent in St. Mary's and all the Catholic community in Kingman. They were his family. He loved being Dad and Grandpa, and Uncle Hank. He will be remembered for his volunteering in many ways at St. Mary's. Among his favorite endeavors was serving Bishop Olmstead from Phoenix dioceses on Nov. 22, 2009. He served St. Vincent de Paul and Knights of Columbus, Fourth Degree.

He will be missed by Deanne Kosters of Kingman, Donna Burchard of Newport Beach, Calif., and Marcia Parsons of California. He is survived by eight grandchildren, including Sherri, Carolynn, Kenneth and Robert; four nieces, one in Saudi Arabia, two in California, and one in Arizona; and his beloved family, the Catholic community. Hank is also survived by his beloved dog, Uncle Louie.

Dad was on dialysis the last 18 months of his life and confided that he was living on borrowed time. But he wasn't. He was living on blessed time, and he used every minute of that blessing.

Visitation was held Sunday, Jan. 31, at Sutton Memorial Funeral Home with the Rosary at 4 p.m. The service was Monday, Feb. 1, at St. Mary's Catholic Church, followed by burial at Mountain View Cemetery.

In memory of Hank, his wishes would be to volunteer your services somewhere in your community.